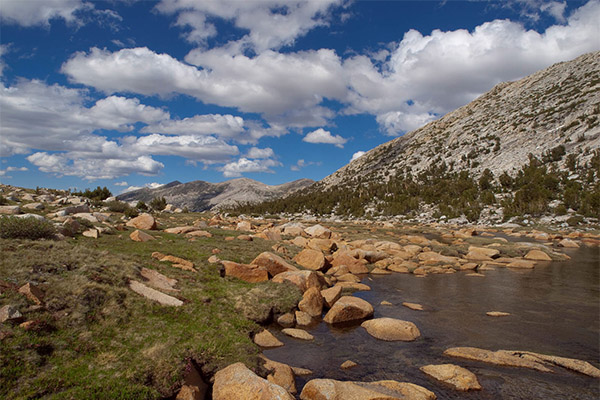 In the middle of July, I went with some PCS folks for two days in upper Yosemite, to dayhike Amelia Earhart Peak and Mt. Dana.

For the hike to Amelia Earhart Peak, the eight of us met at the prearranged (and completely full) Wilderness Permit Office parking near Tuolomne Meadows.  Our group included hike leaders Joe and Judy plus Isabelle, Jeff, Leo, Lesley, Sassan and myself.  We set off at 8AM beneath clear skies and the beginnings of a warm summer day.  Only a few minutes past the trailhead, we encountered a researcher in a lawn chair distributing GPS units to dayhikers to track hiking patterns in the park.  We agreed to participate, and Leo as the tallest ended up with the extra piece of hardware attached to his pack, but we never quite succeeded in figuring out our position from it.

Following the JMT from Tuolomne Meadows in the direction of Lyell Canyon, we skirted the meadows, passing in and out of thin pine forests for several miles before finally emerging at the edge of the Lyell Fork.  Lyell Canyon proved to be in the late stages of spring, covered in lush green, with the gently murmuring creek at its center.  We saw a number of backpackers, but also marmots, pikas, and other locals.  We arrived at the Ireland Lake trail junction, 6 miles out, around 10:30AM.

The original plan was to follow the trail along Ireland Creek for a short bit, then climb the spine of the ridge to Potter Point and follow along that ridge to Amelia Earhart.  Viewed from close up, this proved less appealing, owing to the ridge’s quite steep initial incline.  Accordingly, we took the Ireland Lake trail up from the junction and  ascended 1000 ft. over the next 1.5 miles through a thick pine forest into a large basin below Potter Point.

Shortly below the waterfall, Joe led us across the creek and through the rock slabs and bushes of the northwest slope of the Potter Point ridge.  Opting not to gain the ridge before the saddle between Potter and Amelia Earhart, we traversed the mountainside at around 10800 feet, and did not gain the ridge until we were almost directly below the saddle with the first of several small lakes in the basin directly below us.  The last 200 ft. to the ridge were quite steep.  The first stretch after the saddle involved clambering over larger boulders and slabs, but became a straightforward scramble over scree for the final 500 ft. to the summit.

The summit of Amelia Earhart Peak wasn’t especially prominent, and it was only the presence of the register which indicated that the true summit was not another 200 ft. further along the ridge.  Nonetheless, we had expansive views, east across Lyell Canyon to Mt. Lyell and Donohue Peak, south to Parsons and Simmons peaks, west to Ireland Lake and especially north and northwest to peaks well beyond Tuolomne meadows.  Exotic cloud formations decorated the horizon, near and far.  Because we didn’t summit until 2:30PM, we had a relatively brief stop on top.  We found a number of familiar names in the register (which consisted of 3 books going back to the early 1990s).  In the absence of the catered lunch Joe had promised on the way up (too late?) we made do with a quick bite before leaving!

Returning to the saddle by the reidgeline, we descended immediately to the basin below instead of traversing, abandoning the route we’d taken for the ascent.  It was a quick scramble down and by 4PM we’d crossed Ireland Creek and were making our way over the wide plateau to its west.  Finding the trail was a slightly more difficult task as we reached the edge of the woods on the northwest side of the plateau without any sign of it.  Joe’s idea to follow the drainage of the small unnamed stream there worked very well, and we intersected the Ireland Lake trail only ten minutes later.

The rest of the route was the same as it had been in the morning.  We’d reached the trail at 5PM near the 10000 ft. mark.  By 6PM we were at the junction with the JMT, with Lyell Canyon bathed in the soft late afternoon light.  Judy led at a brisk pace, and aside from pausing to observe a small herd of deer whom we’d startled by passing, we continued uninterrupted back to the trailhead at Tuolomne Meadows which we reached, feeling somewhat sore, after 8PM.

Feeling a bit sore but otherwise refreshed, we met the next morning outside the Tioga Pass park entrance.  Despite the stiff breeze, the consensus remained to climb Mt. Dana, and we were off before 8AM.  The trail shortly emerged from the thin pine forest on Dana’s west slope presenting splendid views of the area including the previous day’s route.  Lupines, forget-me-Nots and other wildflowers were plentiful.

Arriving on the large plateau below the peak (10800 ft.) at 9AM, we were immediately greeted by a brisk wind.  This only got stronger as we climbed up the trail and skirted the two remaining snowfields on the west side of the peak.  Everybody was wearing additional layers by the time we reached the northwest ridge (12400 ft.).  We arrived at the summit 3 hours after setting out.

From the top of Mt. Dana we admired vistas that included Mono Lake, much of Yosemite park, the Ritter Range and what Jeff pointed out was Mt. Goddard far off in the distance.  Amelia Earhart peak was visible too, although it was surprisingly hard to identify.  After taking time for plenty of photos and a snack and getting pretty chilled in the process, we turned back to return the way we’d come.

Unlike the ascent, we saw a fair number of folks making their way up as we went down.  The wind was even stronger than on the climb up, and several of us nearly lost our hats.  Arriving back at the parking at 1:30PM we found an impressively long line of cars waiting to enter the park, a reminder of what a popular place Yosemite can be on a sunny Sunday afternoon!  After the previous day’s late finish, we were all happy to have had such a scenic but shorter climb for the day.