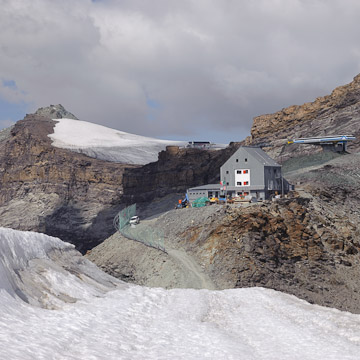 It was a bit past 8 in the morning when we set off from Zermatt to continue our hike of the ‘Tour de Monte Rosa.’ The town itself was still pretty quiet, as the usual hordes of tourists were either still asleep or not yet arrived. The weather was cool. The sky was crisp. And we were, as usual, in a bit of a hurry, for a half past noon appointment with the glacier guide left little time to spare.

The first challenge as usual was to select one of the many diverging trails marked ‘Trockener Steg’, preferably the most direct one. Somehow or other, we ended up on east side of the valley, following a service road that had recently been the site of a running race. Bits of tape and uncollected signs dotted the ground. A lack of signs and the road’s eastward path had me worrying that we were liable to end up at the wrong place altogether. But around an hour out from Zermatt, we reached a fork, and soon emerged from the forest to arrive at the lower lift station of Furi.

From Furi we crossed open pastureland for a while, passing chalets and farmhouses and even a small collection of goats, congregating in front of what appeared to be a restaurant. But as the trail veered east again, we reached the edge of a deep gorge, and yet another service road. Half an hour of steep switchbacks found us looking across a valley at the trail we were supposed to have been on.

Still, we were on a path, and one which, if the signs were correct, would lead to the right place. The views were nice too, and aside from one fellow on his way down and a startled marmot, we had the place to ourselves. The Matterhorn was to our left, the Monte Rosa plateau to our right, and Zermatt lay sprawled across the valley behind us.

The service road led to another lift station, but we stuck to the trail, and worked our way up between two lift lines onto increasingly rocky terrain. We saw the final lift station nearly half an hour before we reached it, as the path wound laboriously around boulders to finally leave us on a small outcropping. There were plenty of other people at Trockener Steg.

The cable car ride to Kleine Matterhorn was brief but notable for its views over the glacier. The final stretch before the top, the mountain and cable seemed to be going up nearly vertically. We were left in a tunnel, from where one must take an elevator to reach the outdoors. A few short staircases later, and we were standing on top. On the Swiss side the peak dropped precipitously, but on the Italian end, we could see long gentle snow-covered slopes leading to other famous peaks.

A quick look around was all we had time for, and then it was time to take the elevator back down, and emerge from the other side of the mountain to meet our guide. He explained that although we would be harnessed and roped, the route over the Theodul Glacier was essentially safe, following as it did the ski runs used by the summer skiers. Indeed, much of the route was groomed, and none of it was steep, so the 400m descent’s main hazard was the occasionally skier or snowboard hurtling past. There was a very short stretch of ice at the end, and then we were at the Theodul Pass, and it was time to say goodbye to our guide Klaus. The whole stretch took less than an hour.

The Theodul Hut appeared to be undergoing some sort of construction outside. So we walked a few hundred yards beyond it, past an inoperative lift, to find a quieter spot for lunch. By the end of the meal, it had become uncomfortable cold, and with clouds descending, we opted to go inside the noisy hut. Accommodations, we discovered, were cozy but a little quirky. We sipped hot chocolate and read or dozed until dinnertime. The view from the dining room included the Matterhorn and the sunset.

Dinner was mixed – a good soup followed by an unexceptional main course of meat and vegetables. We were seated with two Italian hikers from Milan who were just up to enjoy the mountains for the 2 days. There were all told perhaps a dozen people spending the night at the hut, which meant fortunately no shortage of beds. The construction crew who we’d heard earlier also stayed for dinner, although they left afterwards in a jeep down the shockingly steep service road to Cervinia. The night was cold, and the room unheated, but with 3 blankets, I slept a solid 8 hours.