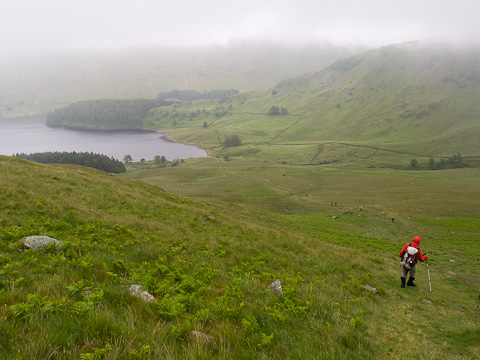 Breakfast was a simple but substantial affair at the hostel. After we had deposited our luggage in the lobby, we began our walk down the main road toward to the White Lion. Already it was drizzling. We stopped at the general store, which proved quite well equipped for hikers. The prognosis for the day’s weather wasn’t looking too good.

We started off once again a little before 10AM, having been slightly delayed by the process of purchasing sandwiches (packed lunches) for the day. Our trail skirted the town and after a short while we were steadily ascending in the generally easterly direction of Kidsty Pike. As we went up, the fog came down. Once we were firmly ensconced in a thick bank of fog, the rain began. Then came the rain.

With visibility limited to 20 feet and rain coming down at all sort of inconvenient angles, the walk became primarily a matter of keeping in eyesight of the person in front. We climbed a fair amount, but thanks to the wind and cold nobody was interested in taking a break. Once we were near the ridge, we met several other groups. They didn’t look any drier than we did. We did make one stop after a junction, and waited nearly 10 minutes for the other half of the group to rejoin us. They had taken a wrong turn and nearly headed back toward Patterdale.

We reached the high point of the day, Kidsty Pike, around noon. There was no view. A few people put on rain pants, but I didn’t both as I was already thoroughly soaked. Descending from Kidsty Pike my visibility was further reduced by rain on my glasses, but somehow or other I managed to keep within eyeshot of the group. The weather did slowly improve after we began our downward walk.

Eventually the rain did stop, and we were greeted with a view of the Haweswater Reservoir, at the bottom of the next valley. There was a road on the far side of the reservoir, but on our side, there was only a trail and an occasional fence. We stopped at a junction just above the reservoir and had a quick lunch. Naturally, it began to rain again as we were finishing.

The walk around the reservoir appeared from a distance to be a flat one. This of course proved to be an illusion, as the trail proceeded to climb and drop continuously as it skirted boulders, forests and whatnot. By the end of the 4 miles around the reservoir, my sodden feet were beginning to get quite blistered. Still, the views were quite unique, including the dam at the head of the valley, and the fog lent everything an air of mystery.

Past the head of the dam, the terrain flattened out. Steep valleys and ridges turned to gently rolling hills, and the rocks and boulders were replaced once more with rolling grasslands. Far to our east, we could begin to make out roads and villages. The sun too decided that this would be an appropriate point to make a reappearance.

Our route to Shap passed through a bewildering array of fences, turnstiles and unmarked junctions. Fortunately, Chris and Mark had good maps and we did not end up having to make any detours. After a particularly nice meadow, we proceeded alongside a small creek and found ourselves face to face with the ruins of an old building. This proved to be Shap Abbey, a great church establishment in the Middle Ages that had fallen afoul of Henry VIII’s feud with the Catholic Church. Some parts, particularly one of the towers, were still intact, and we spent a pleasant half hour exploring the remains of the building and soaking in the afternoon sun.

The final 2 miles were fairly uneventful, save for a pause in the middle of a field where Mark found a sheep stuck on its back with its legs in the air. Once in such a situation, sheep apparently cannot right themselves, and are liable to die of thirst if not assisted. With one quick movement, he grabbed the back of the sheep and rotated it to its feet. The sheep seemed a bit shocked by the whole proceeding, but was happy enough to resume its normal routine.

We reached Shap after 6PM. It proved to be not so much a town as a single street lined with shops, houses and small courts, and stretching over a mile in length. Thus it took almost 20 minutes for us to reach our hotel, The Kings Arms, more than twice as long as the rest of the group took to reach theirs. Aside from being right next to the main road, it seemed a good spot, and we were happy to see that they had a good drying room.

For dinner we all met at the Greyhound Pub, a place heavily recommended by the guys we’d met at the youth hostel the night before. The Greyhound was actually rather upscale for a pub, but nobody complained. In an effort to enjoy something local, I had a lamb burger for dinner. It was a good choice. We also saw a couple of folks we’d seen on previous days hikes in the bar. When we left the pub to return to our hotel, it was raining again. We ran the ¼ mile to the Kings Arms.