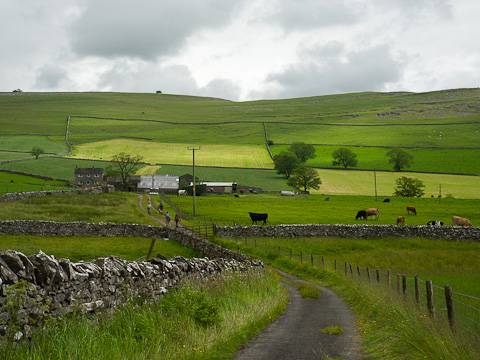 Most of our things were dry when we got up for breakfast, save for the boots. I tried not to have the full English breakfast, but largely failed. The weather was excellent when we met the others in the center of town. After a brief pause at the Coop market for some lunch materials, we were on our way.

Our trail took us almost straight east from the start. The terrain was the flattest we’d seen so far, with no major mountains or steep hills within view. After 20 minutes, we reached the M6 motorway. Happily there was a pedestrian overpass for us to cross on. The trail led us through the pastures in the gently rolling hills and we made good time for the first part of the morning. I took advantage of the rainless morning to exercise the camera some.

Around 11:30AM, we bypassed the town of Orton in favor of a scenic country lane. When we found a farm advertising tea and desserts everybody was happy to take a break. There I ordered my first English cream tea. The desserts were pretty good too. Just around the time we sat down it had begun to rain, and we took shelter under a conveniently-placed awning.

We resumed our walk just as the rain stopped, passing among numerous farms and across field after field. To our north, a dark cloud seemed to hover, but for the time being it gave us no trouble. We took a couple of pauses for snacks but tried to keep a good pace to stay on track for our destination. As a result of the hurry, we ended up on the wrong side of a stone wall around 3PM. Unable to find a turnstile or crossing point, we descended down to a gate, where Mark explained Alfred Wainright’s approach to crossing barbed wire – place a jacket on the fence first, so that if anything gets damaged, it is your jacket and not something more important. We crossed the gate without incident.

We enjoyed lunch on the other side of the fence, but once we had finished, the black cloud to our north had moved to more or less occupy the entire sky. Under threat of rain, we hurried up the hill. First came a slight wind, then a few drops, then a few more, and by the time we were nearly at the ridge, a downpour was in progress.

The rain did not let up as we began our descent on the other side of the hill toward Kirkby Stephen. The fields we walked through rapidly turned into ponds with every little stream suddenly swelling to twice its normal size. One little stream that we delayed crossing had become so wide by the time we tried to gain the other bank that we had to go wading.

The final indignity came near a dairy farm. There the trail used an underpass to cross the railroad. The underpass was dry enough but at the other side we were faced with about 30 cows staring at us. The only path they left us was a deep brown pond that smelled freshly fertilized. Still, if you are going to pass through a muddy pond full of cow poop, best to do it while it’s raining heavily. The rain cleaned the smell and anything else off our boots in no time.

We reached Kirkby Stephen a little after 6PM. The rain which had abated slightly was back to its torrential best. Bob, Sassan and I wished our friends a good night, and ran for our hotel. The Black Bull did not unfortunately have a drying area, but with a generous donation of newspaper and liberal use of the heater and hairdryer we managed to mostly get dry. Dinner we ate downstairs in the pub, happy not to have to face any more rain for the day. I had fish cakes which were excellent, but I would have been happy with anything that was warm and cooked.