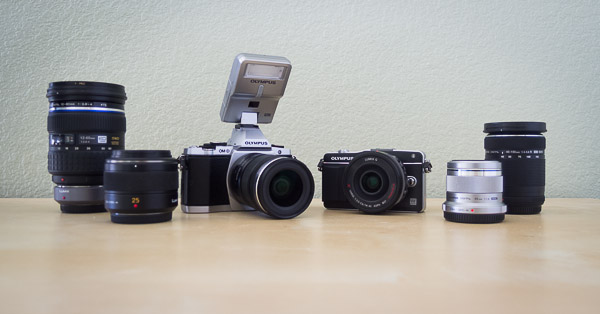 I’ve gone through a fair amount of camera gear over the past two years, but I’ve gradually consolidated things down to this list:

Olympus OM-D E-M5.  The E-M5 is the body that I was waiting for Olympus to release back in 2008.  It offers excellent image quality in good light, and adequate quality in poor light.  The camera is small, solid and nimble and has no major drawbacks for my purposes – resolution and dynamic range are good, autofocus with native lenses is fast, the built-in EVF is bright and big and the controls, while a little quirky, provide quick access to everything I need.

Olympus Pen E-PM2.  The E-PM2 is basically the guts of the E-M5 stuffed in a small, light body.  Put a small lens on it (see below for some suggestions) and you can stuff it in a coat pocket and go anywhere.  Controls are a little limited, but with pretty much everything important just one click away in the ‘Super Control Panel’, I don’t find it much more difficult to use than the E-M5.  About the only real knock is that the lack of a built-in EVF means you’ll either do a lot of squinting in bright sun in order to see the rear screen, or have to mount the wart-like external EVF thus compromising compactness.

Olympus m.ZD 12-40mm f/2.8.  For the longest time, I traded convenience and size for quality, hauling around the classic 4/3 Olympus ZD 12-60/2.8 as my main lens.  Sure, it couldn’t focus in less than 2 seconds and was larger than many DSLR lenses, but the quality of the results couldn’t be argued with.  With the 12-40/2.8, the only compromise is a little reach on the telephoto end.  The new lens is at least as good optically, while being fast focus, smaller, lighter, and having a faster aperture.  It’s by far the most expensive lens I have, but for once, it really is worth it.

Olympus m.ZD 12-50mm f/3.5-6.3.  I have distinctly mixed feelings about this lens, but as a backup for the 12-40/2.8 in conditions where one is reluctant to risk a $1000 lens, it suffices.  Optics are ho hum, but the range is excellent, the macro ability very useful and the combination of weather-sealing and an internal zoom mechanism mean that dust and moisture are not a concern.  Plus if anything goes wrong, it can be replaced for < $200.

Panasonic 14-42mm f/3.5-5.6 II.  It’s truly astounding how many 12-xx and 14-xx slow kit zooms m4/3 has. The 14-42 is my compromise lens of choice when I want a small zoom for the E-PM2.  It’s smaller (especially extended) and sharper than the Olympus 14-42 II, and fairly inexpensive secondhand.  Still, if the price on the Panasonic 12-32 ever reach semi-reasonable levels, I’ll probably replace it with that lens, since the 12-32 has that magic 2mm on the wide end, and is considerably smaller.

Panasonic 45-150mm f/4.0-5.6.  Telephoto photography isn’t really my thing, but I do occasionally like being able to zoom in on distant objects (particularly when I reach the summit on a hike).  The 45-150 is small, light and reasonably sharp, so for that purpose it does nicely although if I shot sports seriously, I’d probably need a faster lens.  It’s a bit better than the Olympus 40-150 R that it replaces, as well as the other 45-xx Panasonic zooms.

Panasonic 14mm f/2.5.  Of all my lenses, the 14/2.5 is the one that makes the least sense objectively – I have better lenses, and I have equally small lenses.  But if I just want to go out and have a camera with me in case I see something interesting, the 14/2.5 is a surprisingly good fit with its fast focusing and minimal size.  I certainly haven’t taken any masterpieces yet, but it’s fun and inexpensive, so I suspect I’ll be keeping it for a long while yet.

Panasonic 20mm f/1.7.  The 20/1.7 checks is a perfect lens save for one very annoying flaw – it’s small, good optically, fast in terms of aperture and relatively affordable.  It also is slow to focus, especially in low light.  As a carry-around lens on the E-PM2, it works well, but for social snapshots indoors, it doesn’t quite satisfy.

Panasonic 25mm f/1.4.  Were it not for the 20/1.7s AF limitations, I wouldn’t own the 25/1.4.  But as it stands, the 25/1.4 is the best low light lens I have – bright in terms of aperture and fast to focus.  It also renders out-of-focus regions quite nicely, and the wide aperture lets me experiment some with depth-of-field.  All things being equal, I’d prefer to just have one fast normal lens, but for the time being the 25/1.4 is indispensible.

Olympus 45m f/1.8.  The 45/1.8 is my people lens.  For both formal and informal portraits, I find it a good focal length for people, with minimal perspective distortion.  It is also fast focusing, sharp and has a wide aperture allowing one to defocus the background.  I wish there were more lenses like the 45/1.8.  About the only thing wrong with the lens is that it’s colored silver.

Olympus FL-300R.  I really don’t use flash much, but the FL-300R does the trick when I do.  For the size, it’s reasonably powerful and the head tilts and bounces quite nicely.