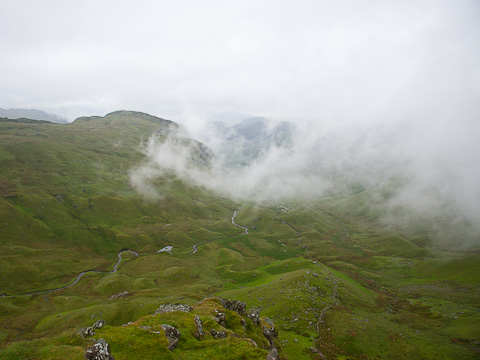 When we awoke for breakfast, it was raining. It was still raining when we set off from the Honister Youth Hostel for Longthwaite an hour and a half later. We managed to avoid walking along the main road down from the pass, instead descending via a hillside trail. While the route looked obvious on the map, it was a little more complicated in practice, and when we saw a small town below, we immediately took the first path that looked to take us down the hill. But the hamlet we arrived in didn’t appear to have our friends’ accommodation in it, so puzzled, we continued on. Half a mile later, we arrived in the correct town.

At the Borrowdale Youth Hostel, we found Michelle and Mark, but Bridget and Chris were off looking at the ancient yew trees nearby, so we waited a bit a the hostel and watched the rain falling. It was almost 11AM when we set all set off from the hostel for Patterdale. It was still raining.

Our route took us down through two other tiny villages. In one, we found an open shop and bought some cheese (not local, but it was the only thing they had). Then our trail took a sharp right, to beginning ascending one of the subsidiary valleys. The landscape consisted of sloping fields, occasional trees and more than a few streams bounding down from the hills above. Most striking however were the stone fences that criss-crossed the seemingly otherwise untouched hillsides. The sheer amount of effort required to put together just a small section of these fences was hard to wrap one’s head around.

The trail took us steadily upward. Michelle and Mark were ahead of us, preferring not to take any pauses given how cold the rain was making things. We followed, with occasional pauses. The trail gradually left the right bank of the Langstreth Beck which it had followed, then climbed steeply toward a pass. With the rain and low-lying fog we discovered the pass wasn’t really any such thing, and there was another ascent through what was effectively becoming a bog to reach the actual pass. All of us were cold and quite wet when we arrived at the saddle around 1PM. Michelle and Mark were finishing lunch just on the other side.

Since the rain had mostly stopped, we took our lunch break on the pass too. Indeed, we saw a few beams of sunlight break through the clouds on the valley below. After lunch, we began the long descent toward Grasmere. The valley was fairly wide, and we followed the trail down as it crisscrossed between streams and among boulders. The rain had made things slippery too, so we took our time. At length, the valley began to flatten out and we encountered first sheep, then some dilapidated stone sheds, and eventually a few farms.

We followed the Langdale Beck down toward Grasmere for much of the afternoon. Once we left the upper section, the rocks and boulders gave way to lush pastures full of wildflowers. The steeper hillsides were heavily forested. The trail became a road, and the road deposited us in central Grasmere.

Grasmere was by far the largest town we’d encountered since leaving Kirkby Stephen. The main streets were filled with people, and we stopped in a café for some hot drinks and watched them pass by for a while. Then we headed off to check in at the Oak Bank Hotel. Unlike the previous nights, this was a fairly luxurious affair, with a cozy sitting room and a large dining room. We spent some time drying off and relaxing before reconvening for dinner around 8PM.

Dinner at the hotel was an elaborate affair consisting of 4 courses. I don’t remember quite what I had, but the meal included a sea bass main course, quail eggs as part of the starter, and a pretty good salad. Dessert was nice too. Of course as we were celebrating the birthdays of Bridget and Chris, it was only appropriate to have such a meal on that day!

After dinner, Chris, Bob, Sassan and I took a little walk to see Wordsworth’s cottage. The famous poet had lived in the town for a good portion of his life, and we were anxious to see his home. It proved a substantial building, much larger than the image the term ‘cottage’ signified to me. In spite of the near-darkness, we also managed to locate his grave in the cemetery. After the soggy day and big dinner, we slept well.