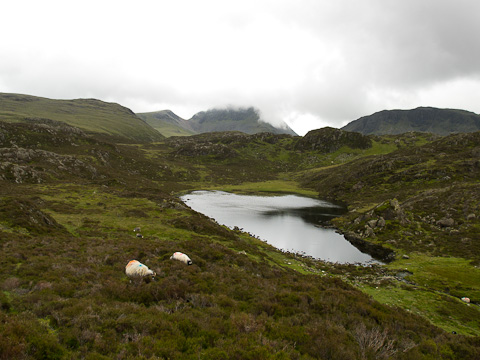 When I got up at 7AM, things seemed to have returned to normal. Electricity was restored and everybody was getting prepared for breakfast. S, Bob and I had stayed in the ‘bunkhouse’ portion of the farm, essentially a large room with a dozen beds in it. It had worked out quite nicely really.

Breakfast was the real deal. While I didn’t quite have the traditional ‘Full English breakfast’, it was still more than enough – toast, marmalade, hash browns, poached eggs, sausages and several other things I must be forgetting. Then we had to repack our bags for the luggage service before setting off. The proprietor of the farm, despite the long night (the electrician had come at 1AM, and he had been up again at 5), was quite friendly and philosophical about the whole thing. We learned that the farm included not only sheep and crops, but a riding school and the horses we’d seen on the hike the day before. He was evidently used to long days in the summer!

It was nearly 10AM by the time we had begun walking down the hill toward Ennerdale Bridge. This time we made no stops, continuing past a stream and an old mill to a trail on the south side of the Ennerdale Water, a large lake occupying most of the narrow valley we were to walk through. Unlike the previous day, there was little sign of civilization once we left town, and the trail skirted boulders and small stands of trees as it steadily traversed around the lake. We passed Robin Hood’s chair which afforded a nice view of the valley.

Beyond the lake, the trail continued up the valley, through a forest under the management of the local forestry council. We didn’t see any wildlife, but a few hundred yards from their office we did meet first a chicken and then a rather friendly cat. It was a little after noon and at this point the group split. Bridget, Michelle, Mark and Sassan opted to take the standard route, while Chris, Bob and I decided to try the high route, via Red Pike and the ridge. The weather was cool and mostly overcast, but not overtly threatening of rain.

Our route immediately began climbing steeply for the ridge. The trail passed through a combination of ferns and bushes, and we saw a decent number of sheep as well. After nearly an hour, we left the bracken for grass and reached the ridge. We had occasional views, but a low fog was blowing by as well. We encountered a good number of people on top of Red Pike. We couldn’t see too much because of the fog, so after a snack break, we continued along the ridge. Through gaps in the fog we could see down both the valley of Ennerdale and the adjacent valley containing Buttermere.

The ridge walk was quite rocky belying the impression I had had of English hills as gentle and rolling. We passed 2 other summits, pausing for photos on each and reaching an elevation of more than 800 meters before making a very steep descent down more than 300m only to begin climbing a set of jumbled rocks and hills known as Haystacks. In a few places the trail gave way to boulders and we had to simply haul ourselves up on them.

The view from the top of Haystacks was quite expansive, including two valleys, several long ridges and a great deal more. Our trail continued along the ridge, past several little tarns before finally leaving the ridge to cross the watershed and climb the next ridge on the left toward the remnants of the old slate mine. We rejoined the main trail near an old structure built entirely from flat rocks, and after reaching the top began our descent following the same route as the now dismantled tram line to the mine.

It took about half an hour to descend to the slate mine, and our timing was exactly right, for the rain that had been threatened for much of the afternoon had finally arrived. We ducked into the Honister slate mine’s gift shop for a bit before the half of the group headed for Longthwaite began their last leg. Bob, Sassan and I remained as we were staying at the adjacent youth hostel, a few hundred feet away.

The Youth Hostel Assocation’s building was a well appointed one with a good view of the surrounding area. We had (for a price) gotten our own room. Checking in involved a slightly bewildering array of choices, from what dinner meal we wanted to have, to what our breakfast was to be the next morning (and of course when). Still, once we were settled it proved a comfortable area. Our room had a view of the hillside and we could admire the sheep as they wandered to and fro methodically clipping the grass with their mouths.

In spite of the complicated procedures, dinner was actually a very simple affair. The food was decent, but it was clear that everything was being more or less prepared the same way, which made all the fuss doubly puzzling. I went to bed shortly after dinner. None of us were feeling sufficiently energetic for an after-dinner walk down the hill to Longthwaite.