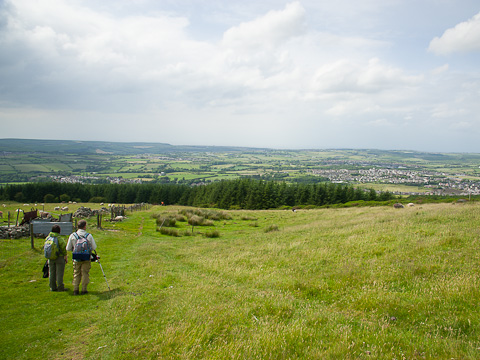 We awoke at 6AM after a shortish night. It was already quite light out, thanks to our northern latitude and we quickly finished packing, leaving one bag behind and setting the other down in the hotel lobby to be picked up by the luggage service. After a short wait in the sunlight by the bus stop, the Penrith bus arrived and 5 minutes later deposited us at the train station at the far end of town. Soon we were passing rapidly through the Cumbrian countryside, headed north on the 7:40AM train to Carlisle.

We arrived in Carlisle just before the next west coast-bound train left, but we didn’t find the right track until it after was gone. So left with an hour to wait, we walked through the pleasant old town in search of a bakery. Breakfast was had at the train station café. Finally around 9:30, we boarded the train for St. Bees.

As we headed south and west toward the coast, the weather got progressively worse. Morning sun was replaced by darkening clouds. The seashore looked beautiful and dramatic, but before we had reached St. Bees rain had started again. We did receive some encouraging words from a fellow passenger who had come down for the day from Edinburgh wearing shorts.

Once we had left the train at St. Bees, we bundled into rain gear, and after asking for directions to the coast, headed straight along the main road up a hill. This proved a mistake, as in addition to encountering a fair amount of traffic, we apparently bypassed the first section to the hike. We didn’t realize this until after nearly an hour when we met some fellow hikers. The arrangement was to meet the rest of our group (who had taken the bus from Kirkby Stephen) above the beach, so we decided to follow the trail in the opposite direction as our route, in hopes of finding them.

We crossed a number of fields, passed through the little town of Sandwith and after some debate as to which way the trail went, reached the sea just above a large quarry. There, to our relief we found the rest of the group. After retracing our steps to the main road we continued eastward. The rain slackened in the early afternoon, so we had a brief lunch in a field within view of the rail line before taking the trail onto the route of a dismantled rail line that now served as a bike path. We met several other groups along the way beginning the same hike as us.

At length the route took us through the edge of Cleator Moor and then left the town and fields to climb steeply up a wooded hillside for the first major exertion of the day. We reached the top of the hill around 3PM and were afforded wide views of the surrounding area as well as the sea. Our break was cut short by a sudden outburst of rain, driven into our faces by the stiff wind.

The descent was surprisingly steep, but when we reached the bottom of the next valley, the rain had stopped, and we were treated to snacks prepared by Chris and B’s mother. Then it was up another little valley where we passed a large group of horses before turning off the main route to arrive at a large farm where we would spend the night.

The first priority, as would become routine over the next 2 weeks, was to get dry. Once this was accomplished, there was dinner to figure out. The English contingent of our group had reservations for dinner at the farm. The other 3 of us had not, so we decided to walk down the hill to the town of Ennerdale Bridge. We wound up at the Fox and Hounds Pub in the center of what was a very pleasant, but quite small town.

The pub was a popular spot. In addition to a few other hikers, there were plenty of locals. There I learned that in a pub one must order at the bar and that unlike American bars, pubs actually have a fair selection of food. I had lasagna, which was good save for the fact that nearly half the dish was cheese! Bob said the beer was quite good too. Just as we were planning on leaving Chris and Mark arrived in search of a drink, having finished dinner at the farm. So we hung around for a bit. Mark was interested in seeing what the town’s other pub had to offer, so before returning we had a wander through town, and everybody had another pint at the Shepherd’s Arms. There was still plenty of light as we trudged back up the hill to the farm, well after 10PM.

I was in the restroom brushing my teeth a little while later when the lights went off. We quickly discovered that the power for the entire farm was off. It turned out that the power strip that Sassan had brought along as a way to charge camera batteries and cell phones had a surge protector in it, and rather than protecting against a surge, had caused one. Not only that, but the power at the two neighboring houses had also been disabled. When I went to bed soon after, the proprietor of the farm was arguing on the phone with the electric company. It had been a full first day.

One thought on “Day 1 – St. Bees to Ennerdale Bridge”