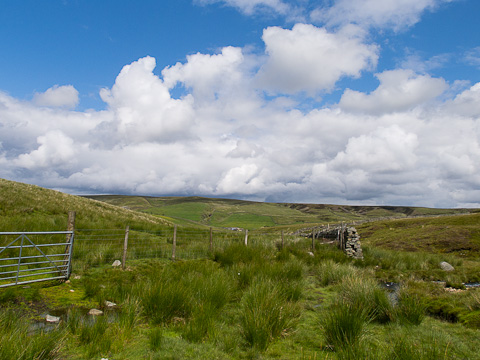 Things did not look wonderfully different in the morning. The sky was still gray, and my boots, in spite of heavy use of the hair dryer, were still excreting water. Our relaxed breakfast was interrupted by the news that the luggage van was there to pick up our luggage. Frantic packing ensued. Fortunately the van dropped by the other hotels first, giving us a chance to put things together and nothing was forgotten.

We met the others in front of the hotel at 9:30AM. To protect himself from the rain, Bob had a large rain poncho that looked not unlike a sail. With some work, he succeeded in securing it. We set off in the direction of Keld under heavy drizzle.

As usual, the day began with an ascent out of the valley. The first section was on road and we passed numerous other hikers on the same route as us. At the top of the first hill, we hit a substantial junction. The guide-books had warned us of a choice of different routes of varying degrees of bogginess. We opted for the summer route, but quickly discovered that it was nearly impossible to distinguish official established routes from use trails. We took what we thought was the driest way, and headed up.

Surprisingly, the weather actually improved as we climbed, and while the clouds didn’t lift, the rain stopped. At what seemed to be the high point of our trail, Chris suggested a detour to Nine Standard Riggs. I was interested but nobody else seemed to be, so the two of us split off in the direction of the ridge. The Nine Riggs were in fact not too far away, and after 20 minutes we reached them – 9 large rock monuments allegedly erected by the ancient inhabitants of the land. We had an interesting view across the valley too, and back to Kirkby Stephen.

After admiring the view, we saw another front of dark clouds to our north and decided we didn’t want to spend the next downpour on top of the boggiest summit in the Pennines, so we started down. We followed a trail, but a combination of bog and erosion meant the trail frequently degenerated into small mud bowls and ponds, and it required constant vigilance to avoid slipping. My boots were still wet from the previous day, so I soon gave up trying to avoid stepping in puddles, and just tried to avoid the mud where possible.

We aimed for the main road that we could see below. Imagine our surprise then when we reached the road and discovered the other 5 taking a snack break barely 100 ft. away. We took a snack break too.

We only followed the road for a short stretch. Then we left with the trail, climbing another hill and soon reached a pass. At the other side was the long valley of Birkdale, where the bog gave way to pasture. Soon the sun had come out again and we took a pause to enjoy the view and divest ourselves of excess raingear. Bob took a nap in the sun and we succeeded in continuing almost a quarter of a mile before he noticed we had disappeared.

The first farm we came to was at the edge of a wide stream. Tea and dessert was advertised so we sat down, and were quickly greeted by a friendly lady and her equally friendly little white dog. After we ordered, the dog amused himself by climbing up on the table and looking for food. Meanwhile, the two children, age 5 or 6, were having a grand time running after each other and the little boy was whooping with delight as he tried to prod his sister with a large rhubarb leaf. The sign in front of the farm said: Careful: free range children.

As we enjoyed our tea at the Ravenseat Farm, the blue sky again gave way to dark clouds. We didn’t get too far before the rain began once again. When we passed some stone sheds, we briefly considered whether it would be worth sheltering there, but the rain began to flag and when we turned the corner onto the valley of Swaledale, we could again see the sun.

The Swaledale was a pretty little valley indeed, and we took our time descending. The river had a series of little waterfalls and the banks were lined with rocks, grass and flowers. Just after reaching the road, we reached our accommodations, the Keld Guesthouse. As the rain was starting up again, we hurried indoors and the rest of the group hurried one. The Guesthouse proved a pleasant building with a few of the guests already arrived. We dried off, situated ourselves, and after a short chat with the proprietress, decided to wander off to town in search of dinner.

Dinner was had at the Keld Lodge, essentially the only restaurant in town. The lack of choice was no setback though – the poached salmon I had was delicious and the lodge proved a cozy place from which to watch the afternoon shadows lengthen over the valley. We saw a few of our fellow coast-to-coast hikers as well. After dinner we took a leisurely walk through town, admiring the new cultural center in its 17th century building. We met Chris and Mark on the road as we headed back toward the guesthouse, but the midges were beginning to swarm, so we said a quick good night and dashed indoors.