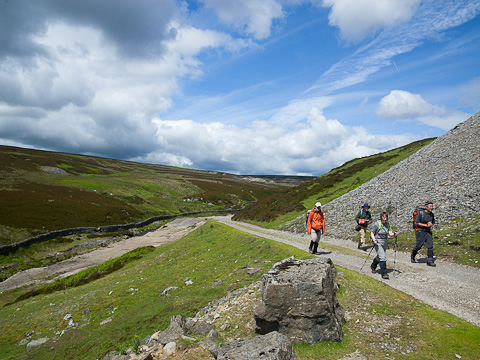 We arose to blue skies. Breakfast was simple but filling. We managed to get all of the luggage packed well before the van showed up. When we said goodbye to the guesthouse and its owners, their dogs and cats were frolicking around in the front yard.

After meeting the others in the center of town, we decided on the day’s route. Rather than follow the low route along the bottom of the valley by the Swale river, we would take the high route through the Pennines and Britain’s old mining areas. We began by crossing the river and ascending. We passed a number of pieces of derelict farm equipment. Mark tried to drive the tractor he found half buried by the trail, but the missing gearbox proved in insurmountable obstacle.

The trail next traversed a subsidiary valley, leading us down past an old mining operation. Several stone buildings still stood in varying degrees of disrepair next to the creek. Then we climbed up another hill onto the broad shoulder of the ridge. We were not especially high up, but the views across the valley and its neighbors was expansive. Along the ridge we found some odd wooden and stone structures that we eventually realized were for grouse hunters. Farther along, we saw actual grouse, though they were less than pleased to see us.

Continuing down from the ridge, the trail broadened into a dirt road. We took our lunch outside an old shed, enjoying our views of the valley. The road took us down fairly rapidly after lunch, and by 2PM we were crossing a highway. There, in the middle of the Yorkshire Dales, with a pleasant afternoon sun shining on us, we lay down on the grass for a siesta. We probably could have spent all afternoon there, but one member of our group started flinging small objects the others. So after identifying the culprit, folks were up and we prepared to continue.

The hillside that we were traversing grew steadily larger. After a surprisingly steep stream crossing, we saw a large number of sheep bunched up in the distance. Soon we perceived a farmer in a tractor was behind them, attempting to herd them into a lower pasture. On each side of the farmer was a sheep dog, attempting to keep the sheep at the edges from peeling off. We watched for a bit.

Continuing our descent back to the Swale, we soon reached a decent-sized town. Almost all of the houses were stone, and the gardens were clearly well tended. In front of one house was a vintage automobile – a Triumph from the early 1960s. Even the phone both was impeccable. Still, after we had walked for 5 minutes and reached the end of town, we realized that this was not in fact the town were supposed to be in. We had descended the last hill prematurely.

So we followed a little path by the river. We soon met two people with a baby and two dogs. They appeared to be trying to teach the dog to swim, but the dog was more interested in getting anybody near him wet. We continued on our way. After half an hour, we emerged in a slightly larger town, and then on a town square where the remains of a farmer’s market was being put away. We had reached Reeth.

Having found a convenient pub at the edge of this square, Mark, Bob and Chris were happy to pause and enjoy a few pints. I was happy to let my feet rest and soak up the sun. After an hour or so, we split to go to our respective hotels. As soon as I had checked in at our hotel, I realized we’d lost S. A text message confirmed he had continued walking on to the next town. So I had to determine our location, and text directions back.

For dinner C’s group had arranged to eat at the Bridge Inn at Grinton. Indeed Chris and Mark were wondering why they couldn’t have spent the night there too (it had space available). We went to join them, enjoying a nice walk that took us past the local encampment of the British Caravanners Club. Dinner was good, although we were soon reminded that it was a Friday night by a very excited and somewhat loud group of 15 or so people at a nearby table. Faced with superior vocal cords, our conversation diminished somewhat. When we left the inn to return to the Arkleside Guesthouse, it had begun raining again.