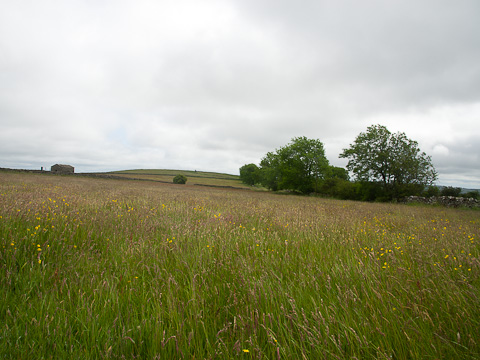 It was heavily overcast when we went to the dining room for breakfast. The guesthouse offered the usual full breakfast, so we left quite full. The people we saw at breakfast seemed to the think warmer weather was in store, and we hoped that they were right.

We met the other 4 in front of their hotel at Fremington. Our route began by following along the river. Slowly the valley narrowed and we began to ascend the gentle hills on its left. At one point we passed into some woods, and the trail became composed entirely of stones. Although the sun didn’t appear, the temperature was getting warmer.

At the top of the hill, the scenery opened up. We made our way around the small town of Marrick, and then across several large fields before reaching Marske. Surprisingly we saw none of the folks we usually did one the trail. They were either ahead of us, or using a different route.

The next major town we found was Marske. There we found a pleasant old church, and after exploring that, everybody was happy to stop at a tea-house with a nice garden and get something to drink. The establishment was partly garden seating, and partly indoor restaurant, but the interesting thing was that the indoor seating was essentially surrounded by glass. Probably a good place to be, except on sunny days.

A short distance past the town we crossed a large field, and found a good spot for lunch. However, we were only about halfway through when it began to drizzle. Everybody packed up their stuff immediately and bundled into their raingear. The previous days had made us a bit skittish, I guess. In any case, we continued shortly after that. Our route traced along a hillside above the river. From it we had a view that increasingly mixed countryside with signs of suburbia. In the hills were the farms. At the bottom were car parks, and several large warehouse-like buildings.

The rain that had threatened disappeared quickly but the moisture did not and the last climb of the day was sweltering despite being under a dark canopy of trees. When we did emerge at the other side of the forest though, we were treated to a scene that included the sizable town of Richmond and its castle, amidst numerous other towns and the rest of the countryside. It was a pretty sight.

Descending to Richmond took us past first large, relatively new houses, then the community garden, and then the dense town center. After the small towns of the previous week, Richmond was a metropolis and we needed several sessions with the map to situate ourselves. Our accommodations were in the relatively upscale Frenchgate Guesthouse, and after dropping our packs their, Sassan and I went out to explore the town.

Defended on 3 sides by the Swale River and perched on a fairly steep hill, Richmond was ideally located for a medieval town. The citadel and its defending walls were in excellent condition, and positioned such that one could see them from most of the town. We followed pathway that lead on a very pleasant walk around the walls of the citadel, offering views of the river below and the castle above. In the central square, we paused in a food store and finally managed to get some local food – ewes milk cheese (or as others insisted on calling it – used-milk cheese).

In search of something slightly different, we opted for dinner at an Indian restaurant. There we also discovered the difficulties of coordinating dishes among 7 people. Fortunately, nobody was too picky and we ordered enough food for a small army, which proved just about the right amount for all of us. The most notable attribute of the restaurant, other than it being completely full of non-south-Asians, was that the bread (nan) was served in enormous strips hung vertically off huge hooks.