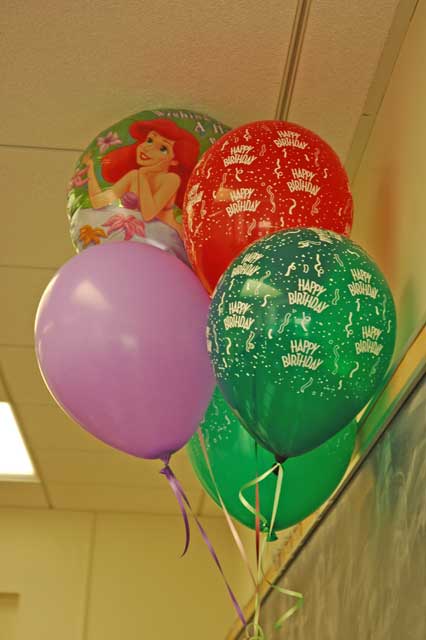 Dreaming in Arabic is something of a misnomer, since it hasn’t happened yet. But I went to class today expecting a rather bland review session, and as usual, things were a bit more complicated. We did in fact start reviewing for the final exam a week from today. But it was also the professor’s birthday, so a few of the more enterprising folks in the class arranged for a cake, card and even presents.

Thus, as I was preparing for a skit where I was to play a bedouin who is outwitted by Juha (aka Mullah Nasreddin, or Nasreddin Hoca), a Middle Eastern folk-character, in come part of the class with a cake, and balloons (although why the Little Mermaid was included, I can’t say), and candles and the whole bunch. Since Ustaz S. (professor S.), being from Egypt, was apparently unused to the practice, and the relighting candles didn’t make it any more familiar. With a great deal of effort (by all of us) all the candles were put out, a card given, cake cut, pictures taken and so on.

Then all the Arabic classes got together for a little show. I did my skit, and pretty much everybody in our class did something (sing Arabic songs, do skits, etc.). The other classes did some cool stuff too, including some guys enacting a scene where the Iraqi resistance goes to Capitol Hill (at least, I think that’s what happened, I couldn’t hear all of it). In the middle, the professor’s wife and 2 young boys came in, prompting much attention on behalf of our class. Little kids proved even more popular than Arabic skits.

After the show, I made my way back to the dining hall for lunch. I made the unpleasant mistake of eating a cheeseburger, which left with indigestion for the rest of the day. Ugh.

The rest of the evening was thus spent fiddling around with the computer, and trying to avoid eating anything. Tomorrow will be better, insh’allah (God willing).