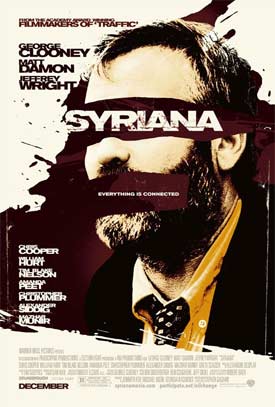 So I wake up this morning and it’s raining. No, really raining. As in, “I don’t want to go outside because I’ll melt” style raining. Yeah, that’s the raining.

So, since Friday is a no-class day (apparently, no professors want to teach Friday seminars), I stayed at home. This was fine so far as I was concerned: sit in my chair, read, pontificate, and above all, stay dry.

Lunch was a dullish affair, and around 2PM I headed off for a film screening in my building. The film? Syriana. Yes, those of you who remember my original blog (since deceased, several times) may remember I began it with a comment on that movie. And indeed, I did.

Watching it a second time through didn’t really change my perceptions. The problem with the movies is that it presents caricatures. The corrupt oilman, the messianic fundamentalist, the go-getter agent and so on. In reality, you don’t need any of these idealized types to get exactly the same mess. Indeed, bureaucracies as Adolf Eichmann readily demonstrated, are far more effective at accomplishing evil than madmen and other ‘bad’ guys. The fact that the Arabs in Syriana are either westernizers or religious nuts (or merciless soldiers) doesn’t really help much. It confirms the stereotype of ‘Good Muslim, Bad Muslim’ as Columbia’s Mahmoud Mamdani nicely puts it.

After the film, I had to pay my dues in the rain, going back to the apartment to pack up my odds and ends, and to the Grad Office to pick up my stipend. Nowhere to deposit it yet, but I’m sure that’ll change. I found my grandmother (as we’d prearranged) in the Physics building listening to professors explain their research to an assembled batch of graduate students. I caught something about ‘molecular machines’ before leaving. A bit above my head…

The idea was for me to go up to Westchester and spend the night with them, and this we did. Unfortunately, a lot of New York was also going up, so the trip wound up taking a while, and involving a lot of unplanned detours, as we sought to avoid the general backup on the main highways. Don’t try leaving NY at 4PM on a Friday. It won’t work.

The evening was spent in a rather relaxed fashion, eating dinner, talking, and clearing up a whole queue of little odds and ends. Just in time for the next installment I’ll warrant. Hopefully tomorrow can finish the apartment-furnishing saga that is now almost in its 3rd week.