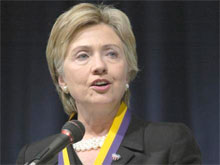 My activities today were limited by two things. First, I don’t have real winter clothing. Oh sure, I’ve lots of layers. But going outside with the temperature in the low thirties and a wind howling out of the north at 25+ mph really doesn’t suit me. The novelty of the snow is wearing off anyways, so there aren’t too many places I’m keen to go to. Second, I have to get this new website up sometime, and now seems as good a time as any. The results you can see for yourselves.

My rather lazy Saturday was punctuated by news that ought to have surprised precisely nobody: Hillary Clinton is running for president. Oddly enough, while my grandfather has gone from Hillary-hatred to something approaching respect, I have gone from Hillary-respect to significant Hillary dislike. It’s not that she’s a bad person (that I know of), and as mentioned earlier, I’d dearly like to have a president who is not a male WASP. It’s just that pandering pro-war centerists aren’t really my breed. Her behavior on the flag-burning bill is exemplary. Tactically, supporting a law rather than a constitutional amendment on the topic may have been the right choice (given that the courts have traditionally thrown out such laws). But the grandstanding that she did accompanying the vote was pretty disgusting. Either she was blatantly pandering, or she’s turned into a crypto-social-conservative. Neither is pleasant, and in the former cases, it’s not merely disgusting but stupid: if she started beating up gay people in front of cameras, the Right still wouldn’t vote for her, so what’s the use? She reminds of John Kerry: the DLC establishment candidate who thinks she can triangulate her way into office. Hardly an inspiring picture.