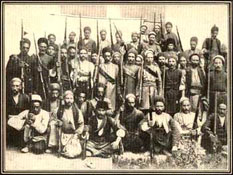 Well, yesterday’s holding pattern was a success. My Arabic presentation (more like personal monologue) went okay, and I did manage to (barely) finish all the readings in time for the afternoon’s history seminar. It was actually a pretty fun seminar, although everybody seemed a bit out of it. The theme was Constitutionalism (Young Turks and Iranian Constitutional Revolution), but it was intriguing just how differently ‘constitution’ was interpreted by the various parties. It served as the proverbial magic bullet for all manner of different causes. Some saw it as a way to strengthen the state, others to loosen its grip. Some wanted to use it to preserve the status quo, others to change it radically. And so on.

The other interesting part was the issue of connectivity. In the example of Iran, for instance, we learn of cases where leaders in northern Iran are communicating with leading Russian and European socialist figures. During the actual revolt, there are numerous cases of revolutionaries in the Russian domains crossing the border to help fight in Iran. The Iranian Constitution was modeled on the 1876 Ottoman Constitution, and at the same time, the Young Turks were taking some of their cues from Iranian Constitutionalists, a number of whom were initially operating from exile in Istanbul. Hopefully, I’m smelling a potential paper topic somewhere in there.