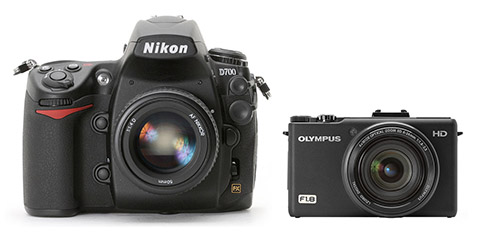 I’ve had an Olympus XZ-1 for almost half a year now as my ‘carry-everywhere’ pocket camera.  By most folks’ standards, it’s a large ‘compact’ camera.  Compared to my Nikon D700 SLR though, it’s a decidedly more travel-friendly companion.  In fact, when I went to England in June, I took both cameras, and ended up actually using the Olympus more, largely due to the convenience (when it rained, it was easy to quickly stick the XZ-1 in a waterproof plastic bag in m pocket, unlike the D700).

The usual knock on compact cameras is that the image quality, particularly when the light levels drop, don’t match up to their larger brethren.  There’s a fairly simple explanation for this: the sensor in your average high-end digital compact is less than 40mm^2.  The size of the sensor in your average DSLR is 350mm^2.  Since the sensor’s purpose is to gather and record light, the smaller sensor records less light, and the less light you record, the less information your image has.  In reality, things are a bit more complicated, but that’s the basic idea.

Why not put large sensors in all cameras then?  Certainly it would improve image quality, and much more than by, say, increasing the number of MP from 12 to 14 or 16 as many manufacturers have done.  There are 2 major problems.  The first problem is cost.  Larger sensors don’t just cost more, they cost much more.  That means manufacturers would either have to increase camera prices, or accept lower profits.  Not exactly appealing.  The second problem is size.  Bigger sensors require bigger lenses to cover them.  The lens in my XZ-1 covers a range comparable to a 28-112mm zoom on a full-frame SLR.  Yet a 28-105mm zoom lens for an SLR typically weighs 1.5x what the whole XZ-1 camera does, in addition to being much larger.

So making a good small camera becomes in essence a problem of putting the largest possible sensor, in the smallest possible body that can reasonably accommodate a lens of desirable range.  Some manufacturers have found a compromise by using prime (non-zoom) lenses, in combination with large sensors to keep body size down (Sigma’s DP1/DP2 series is one example).  But of course not having the ability to zoom is a nuisance too.

Another solution has been to modify traditional SLRs to remove the mirror/reflex mechanism replacing it with a direct electronic readout from the sensor (you see literally what the sensor sees, rather than seeing through a complicated prism/mirror assembly).  This not only shrinks the bodies, but can potentially allow for smaller lenses, since the lenses can be designed to be much closer to the sensor (there’s no longer a mirror in the way).  This is how both old-style rangefinders like Leica’s M9 and new so-called ‘mirror less’ systems like Olympus and Panasonic’s ‘micro 4/3’, Sony’s ‘NEX’ and most recently Nikon’s ‘1 system’ work.

The current generation of mirrorless cameras are all rather small.  An Olympus E-PM1 for example, is not much larger than medium-sized compact camera like the XZ-1.  The primary limitation on size ends up being the lenses.  While the lenses are smaller than traditional SLR lenses, they’re still a lot larger than the lenses on compact cameras, and they don’t retract into the body when not in use.

Or at least they didn’t.  The latest Panasonic announcement is of a 14-42mm (28-84mm equivalent) ‘pancake’ zoom lens.  This is essentially a retracting lens, which is no larger than a small fixed-focal length lens when not in use.  The end-result on a current micro 4/3 body should be something about the same size as Canon’s G12 compact – which is to say not tiny, but definitely small (almost as small as the XZ-1 in the picture above).  And with a sensor that’s 5 times larger, one can expect significantly better image quality, assuming the lens is up to snuff.

Perhaps this will be the first kit that is the same size as a compact, has as good range as a compact, and offers the quality of current DSLRs*.  At least we can hope…

(*The downside of the Olympus/Panasonic system is that they use sensors designed by Panasonic which are about 40% smaller than the current Canon and Sony sensors used in most DSLRs and based on somewhat older technology as well.  Olympus does technically make DSLRs, but for the same reason, performance, at least at the sensor level, has tended to lag Canon, Nikon and the others).