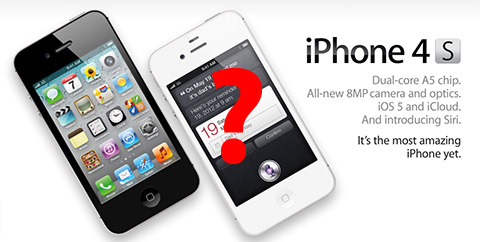 Well, Apple made their iPhone 4S announcement today, and apparently a good many people are less than impressed.

The main complaints I’ve seen so far are:

Same design as the iPhone 4.  This seems to be a form of misplaced status anxiety.  I’ve seen no specific complaints about the iPhone 4 design.  Only a desire for something ‘new’ and ‘shiny’.

Screen is still ‘only’ 3.5″. The assumption seems to be that a bigger screen is automatically a better screen.  From the perspective of pocketability and battery life, that’s not true.  A larger screen would make some things easier, but there would clearly be tradeoffs.

No ‘4G’.  This too seems to be largely ignoring the current complaints about current 4G (LTE) phones, namely very poor battery life.  Network speed can be an issue, true, but the primary issue is not that 14Mbps 3G is too slow, but that network speed in general can be slow.  The most efficient fix is to improve average throughput (which is still far below 3G’s limitations), not increase maximum overall throughput.

No iPhone 5. This is really a rehash of the first objection.  Either it’s a good enough phone to be interesting, or it’s not.  What Apple chooses to label it as is really not relevant.

So what does the iPhone 4S add?

Faster processor. This should be the thing everybody notices.  They’ve added a core, increased clock speeds, and somehow or other kept power consumption to the same level as the original iPhone 4.

Better camera. I have mixed feelings on this one.  The samples Apple posted aren’t half bad* and it’s certainly an improvement on the previous generation in terms of quality and resolution.  But it’s still a long way off from the quality of even a basic P&S camera, and there is still zero control over the basic imaging parameters.

Siri. You can ask your phone questions now.  Personally, I’d rather not.

All in all, it looks like a good upgrade for folks like me with an older generation iPhone 3GS or 3G.  Those who already have an iPhone 4 shouldn’t be in a hurry to upgrade.

As a potential developer as well as a user, the thing I really missed was some sort of clarification/explanation of the app store’s acceptance/rejection policy.  There have simply been too many cases of good programs being arbitrarily kicked out, or delayed indefinitely in the review process for me to be comfortable writing for this platform.  I’m not saying Apple needs to turn the iOS app store into the Android Market (god forbid), but if they’re going to be the gatekeepers for iOS software, they really need a well-documented transparent process.  Arbitrary exercises of absolute power are ultimately neither in the user’s interests, nor in Apple’s.