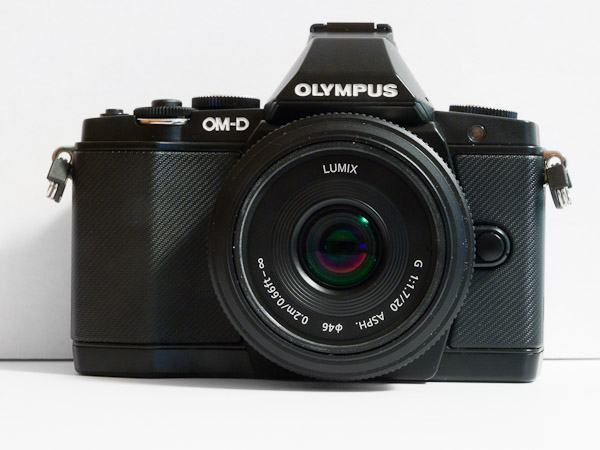 So I broke my self-imposed rule on Olympus products (no camera gear over $500 – they depreciate too quickly) in July and ordered the E-M5.  My excuse to myself was that I had some trips scheduled where I really didn’t want to lug my 4 lbs+ DSLR on, but wasn’t quite comfortable with the quality and handling of my smaller Olympus Pen.  Or something like that.

In any case, when the E-M5 arrived last week, I immediately put it to work, carrying it to a friend’s wedding and then on to Niagara Falls.  It’s seen more than 1k shots now, enough at least for preliminary impressions.

The E-M5 is a small camera.  There’s no getting around it.  I like small camera, so that’s a good thing for me.  It’s basically the same size as my first Olympus DSLR, the E-510, save for being about 20% thinner.  The grip is practically nonexistent.  If you’re used to relying on a hefty rubberized grip to support the camera, you’ll have problems.  I’ve always supported the camera mainly with the left hand (comes of being left-handed) so it’s a non-issue for me.  For those who do like a larger grip, there is an optional external grip from Olympus which is highly reviewed, but it’s not cheap.

In terms of controls, the E-M5 has two separate control dials, and more buttons than are entirely reasonable.  The twin dials are well-placed, and fully programmable.  On the other hand, in squeezing so many buttons on a small body, I think Olympus went too far.  Many are just too small to manipulate easily.  This is not a camera well-suited to gloves.  The saving grace is that with the ‘Super Control Panel’ Olympus includes, the only buttons you really have to deal with regularly are the directional keypad and the ‘OK’ in the middle.  I was a bit annoyed that the On/Off switch was moved from the top of the camera where it’s been in the past to the back, but after a few days, my hands have retrained themselves to the point that I don’t even notice it. 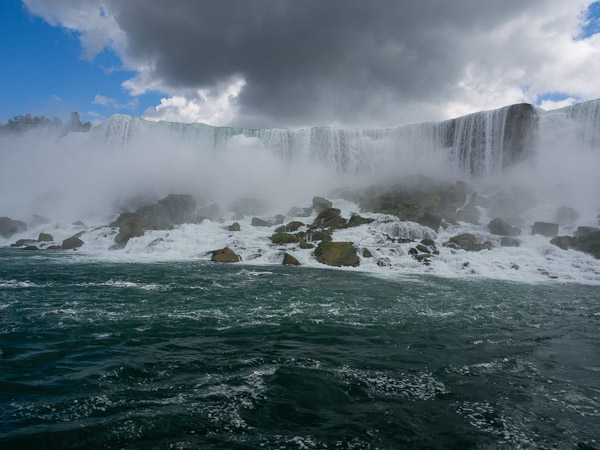 The E-M5 feels fast.  I wasn’t expecting much of a difference from my Pen E-PM1, but for whatever reason, the E-M5 always seems to be half a step ahead of the older camera.  Response to buttons and controls is very quick.  The shutter is light and crisp.  Indeed, if you have the camera set to shoot at maximum speed, you can easily wind up firing off a dozen shots just by tapping the shutter.

Sadly, Olympus has continued their tradition of stuffing the camera with pages after page of customizations.  Normally, I’m in favor of flexibility, but the sheer number of menu options makes it a serious nuisance in this case.  Happily most are of the set-it-and-forget-it variety, and they have implemented a vaguely useful on-screen help system to aid in puzzling out the more obscure and baroque options.

For some strange reason, exposure bracketing is one of those things that is buried in a menu, and after each burst, it must be re-enabled.

Static-subject autofocus on the E-M5 is good.  It’s not noticeably better than other recent micro 4/3 bodies but they’ve all been pretty good.  As always, focusing speed is lens dependent.  In good light, it’s almost always fast enough.  In poor light, it’s generally okay so long as there’s some contrast.  Tracking autofocus (for moving subjects) isn’t there yet.  It has improved from the earlier models, but compared to a semi-pro DSLR it is both slower and significantly less accurate.  A shame as the camera’s 10 fps shooting rate would by well suited to sports, but without C-AF it’s not all that handy.

One really annoying thing about AF on the E-M5 is that the AF points are large by default.  I not infrequently focus on objects behind my subject as the AF point covers both the subject and background.  They can be made smaller, but only in a special mode that locks you out of other settings.  This problem isn’t specific to the E-M5 as it affects all Olympus micro 4/3 bodies, but it can be quite annoying.

The performance of 4/3 lenses on the E-M5 is also unchanged from earlier generations.  AF is slow, C-AF is unsupported, and the camera does occasionally confirm focus even when nothing is actually in focus.  For tripod or deliberate use it’s fine, but for subjects that move, it’s a major nuisance. 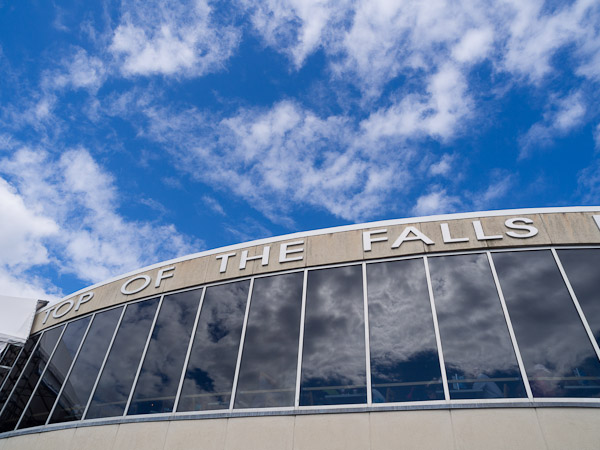 The E-M5 shoots like a prosumer DSLR with two differences.  It’s much smaller and it uses an electronic viewfinder.  Both are advantages.  The electronic viewfinder allows you to gauge exposure and other image settings (e.g. white balance) before taking the image rather than after.  The size means I’m more likely to take it with me in the first place.

In addition to the usually undemanding casually shooting on walks and such, I took the camera to a wedding and to Niagara falls.  In spite of the poor lighting and no flash, I got a decent number of good photos from the wedding.  The limiting factor there proved the lens, not the camera (my Panasonic 20/1.7 is slower focusing than my kit lens).  The lack of a mirror made the camera much quieter and more discrete than my DSLR would have been.  An electronic shutter would have done even better (essentially silent), but that will have to wait for the next revision.

At Niagara Falls, I took the camera on the Maid of the Mist boat ride.  There, the camera performed admirably in despite being subjected to mist and spray for more than 20 minutes.  Whether the weather-sealing deserves the credit, I don’t know, but the camera certainly seems suited to photography in damp environments.  I also had no trouble with dust on the sensor after changing lenses outside more than 2 dozen times.

Of course, for any camera, the primary question is: how good are the images.  With the E-M5, so far the answer is: quite good.  It’s good enough that I don’t have to worry about it most of the time.  By comparison, it’s a fairly noticeable step up from the older 12MP sensor used in the E-PM1 in terms of both noise at high ISO and dynamic range at low ISO.  I use Lightroom for all my post-processing, and the files respond quite well.

Compared to my full-frame Nikon D700 DSLR, the sensor seems a bit more than 1 stop behind (ISO 800 on the E-M5 looks a bit worse than ISO 1600 on the D700, but considerably better than ISO 3200 on the D700).  So it’s still not ideal for low-light situations.  On the flip side, at low ISOs, it captures noticeably more detail than the D700 did, automatic white balance is a lot better and dust on the sensor (unlike with the D700) seem to be a non-issue. 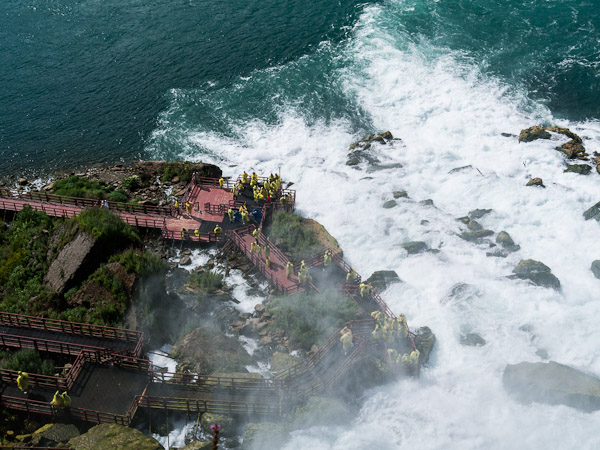 Is it Worth the Price?

The E-M5 is not a low-priced camera.  It has competition from both ends.  On one side, the Panasonic G3 and G5 offer almost as good performance in an equally small package, though with a bit less polish and without certain features, for a $300-500 less.  At the other end, for a similar price, one can get a semi-pro DSLR from one of the big two (Canon and Nikon) for more or less the same amount of money.

Comparing to the Panasonic options, the relevant question is how much the E-M5’s little niceties are worth.  In-body stabilization (every lens stabilized), weather-sealing (though only with a handful of lenses) and more pleasing JPEGs are probably the most obvious advantages, but there a decent number of smaller things too.  For most people, I’d say they’re probably not worth the additional cost though.

Against the likes of Canon’s 60D and Nikon’s D7000, the choice is a bit clearer.  The larger cameras offer marginally better image quality in certain situations, and much better capabilities for tracking action, but they are indeed much larger (and heavier).  Canon and Nikon also have a larger stable of lenses, although micro 4/3 has many lenses, more than a few of which are not replicated by the other systems.  On average, I’d say more people would benefit from more compact gear than the DSLR advantages, but there are clearly folks in both camps.

For my part, I don’t want to carry extra weight and bulk, I photograph mostly static or slow moving subjects, and I’m accustomed to several of the Olympus refinements, so  the E-M5 is worth the cost.

While the E-M5 is a good camera, it does have a few deficiencies and obvious areas for improvement: 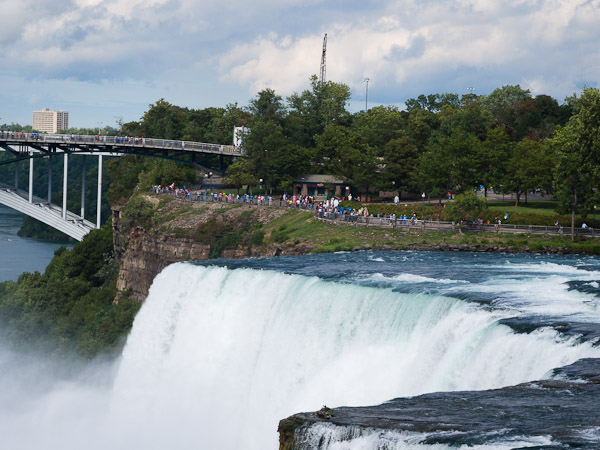