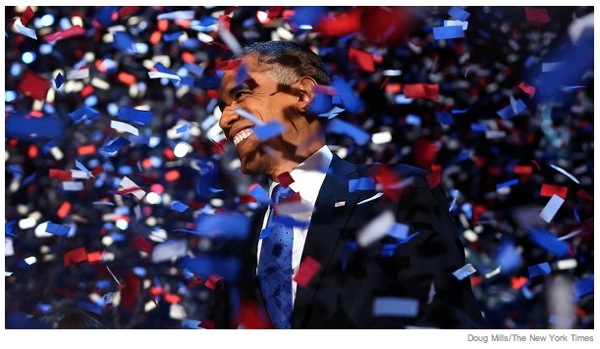 In spite of some early worries, we did not end up in a situation like we had in 2000 last night.  The margin of victory for Barack Obama was small – a half million votes across Florida, Ohio, Virginia and Nevada separated the candidates – but it was sufficient.  Celebration is in order.

As mentioned in my ‘endorsement’ on Monday, I’ve found president Obama to be a mixed bag when it comes to policy.  He has been behind several indefensible decisions, i.e. the ongoing bombardment of northwest Pakistan and the watering down of financial regulation bills.  On the flip side, he has pushed through numerous important bills like healthcare reform and the end of DADT, and he has prevented even more bad laws from taking place simply by keeping Republicans out of the White House.

Despite the mixed record, his victory in 2008 and again yesterday is to me a great reason to be hopeful, both in terms of the groundwork it lays for future policy and for what it says about us.  For the second time in four years, a pro-environment candidate with liberal social views beat out a socially conservative denialist.  For the second time in four years, a biracial man with a funny name who was raised by a single mother defeated an older, whiter candidate from a far more privileged background.  The United States is hardly the land of opportunity many pretend it is, but it is also not a place where family, money and white-privilege inevitably win out.

It is also encouraging to look at the voting trends.  As one conservative dead-ender lamented, the McGovern coalition trounced by Nixon four decades ago is now capable of winning national elections, even in a deeply unfavorable economic climate.  Contrary to received wisdom, African Americans, Latinos, young people and socially liberal urbanites can serve as the backbone of a successful electoral strategy.  We live in a country where male white Protestants can no longer decide national political outcomes on their own.

We should not delude ourselves – the neo-Confederate born-again southerners who form the base of the current Republican Party will not simple throw up their hands and quit politics.  Nor for that matter will the Chamber of Commerce and their allies at Fox & Co go quietly into the night.  But the trends are deeply encouraging.  American is becoming a more tolerant, more open and more diverse place.  If we do our part – if we make our case and if we show up at the polls and encourage our friends to do likewise – then we have a shot at a better tomorrow.    For all his faults, we have Barack Obama to thank for making this moment possible.