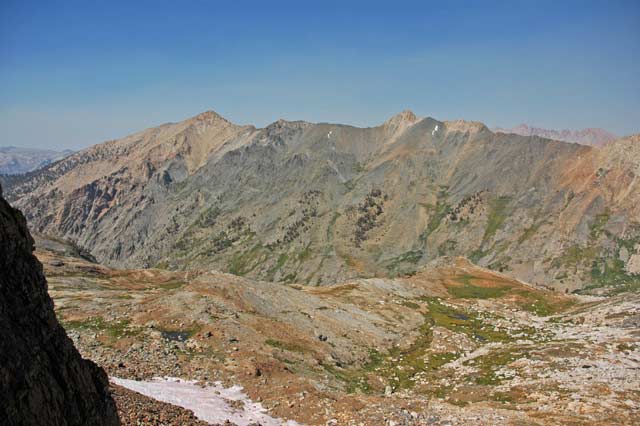 Cold Springs campground, I discovered around 7AM, also meant cold mornings. Whatever. Rise and shine. So we scrambled out of our sleeping bags, and, as there was no tent, decamped in less than no time. The hard part was in fact stuffing our backpacks with all the necessaries for the next 3-4 days, a task not simplified by the subfreezing temperature of my hands. Sunup does not always a sunny place make.

It took a good hour to put together the packs, which, despite enormous care, were rapidly approaching the 30 pound mark. Though mine was the lighter of the two (tent instead of food and stove), I was already envying day-hikers. Around a quarter past 8, we finally drove out of Cold Springs, in search of the ranger station. It only required driving 2-miles in the wrong direction to ascertain that we had not missed the station the evening before: it was simply on the other part of the road.

The rangers were helpful, but a bit vague. From what we gleaned, the trail from Monarch Lake to Sawtooth Pass was mostly sand, and not particularly well-marked. Glacier Pass would not be difficult to reach, but it still retained some snow on the north-facing slope. A few pleasantries about the efficacy of real trails rather than ‘use’ trails later, we were on our way.

At the Sawtooth Pass trailhead, we emptied the car of edibles, roped up with our packs (the process can often leave one feeling like a tortoise that has become stuck on his back), and with a clear blue sky and blazing sun, were on our way at half past 9.

The stretch of trail to the Timber Gap junction was steep, but bearable. Being fresh helped, and my boots hadn’t yet raised the enormous blisters they were capable of. From there to the Monarch Creek crossing went swiftly too. We had good but slightly hazy views of Mineral King and Farewell Canyon as we climbed. The whole area was very dry and not a little dusty.

We crossed Monarch Creek shortly after 10AM, and the trail swiftly entered the trees. We met a somewhat startled deer a few switchbacks up, before running into our first hikers. When we mentioned Glacier Pass to them, we were strongly urged to descend back to the creek crossing, and search for a use-trail on the other side. This would avoid over 1000 feet of elevation gain in the sand below the pass.

Thinking nothing of it, and seeing the trail they mentioned clearly on the opposite hillside, we attempted to do just that. It was only after we had reached the bottom, and could find no trace of the trail we saw, that we realized route-finding was going to require a lot more care.

The next hour was an exhausting off-trail scramble up the canyon, as we attempted to reach the area where we thought the trail should have been. It was a tortuously slow process, and we only discovered the trail we’d been searching for by accident, long after we’d basically given up.

My boots were at this point causing major pain, so a rest was in order, as was a change of socks. The trail we had found proved easy to lose, and impossible to follow. Despite meeting three separate groups of hikers coming down (each with advice), we completely lost the trail at least two more times. From noon to 3PM we made our slow approach to Glacier Pass, below the southern spurs of Empire Mountain. The trail was all rocks and talus. The markings for it did not exist. My feet hurt. It was hot.

Still, at 3:15PM, we were on top of a pass, and indeed it was the pass that we had been aiming for. The trail down looked considerably more obvious, although the slope was extremely steep, and just as rocky as what we’d just climbed. The views, especially looking north at the Great Western Divide, were impressive.

At this point it was clear that we were not going to make it over yet another pass on the other side (we could see the trail, even at this distance) that day, so instead we aimed at the currently invisible Spring Lake, somewhere in the valley in front of us.

Climbing down was a bit worrisome at the start as well. First, there was scrambling over boulders on steep slopes. At one point, I was descending a rock backwards, with only minor footholds, with a 20 foot drop below me. Once the steep section ended, we were going down hard snow for almost 100 yards. There were a number of anxious moments, but neither of us slid too far on the way down.

Soon though, our route became a substantial trail, and we left the talus for a green meadow with charming little ponds and many curious marmots. Then we came out of this bowl to another rocky section, this time with a clear view of the large lake by which we hoped to camp. Getting down to Spring Lake was quite steep, but when we did arrive, around 5PM, it was to a gorgeous blue lake, surrounded by meadows, a few small trees, and on one side, a gigantic snowfield with a cliff above it.

We picked our camp on a strip of land between the main lake and its smaller auxiliary. In due course, the tent was assembled, and we set about preparing dinner. The innovation of the trip was a tiny butane stove and a number of freeze-dried meals. Right about the time we were boiling the water for a ‘Turkey tetrazini’ supper, the sun sank below the ridge beyond the far side of the lake, giving us a colorful sunset, but leaving us in deep and deepening shade.

Dinner wound up being more of a soup than a dish, but having had no lunch, a larger (and soggier) meal wasn’t a problem. The sun had set around 7 on our camp, and by 8PM, as we cleaned up, the stars were coming out. Soon, we had not only stars, but the whole Milky Way galaxy in our view. The tent, without the rainfly, was basically see-through, so we could admire the sky from our sleeping bags. The air was so dry that when I accidentally rubbed my watch with my hand, I saw sparks.

Not long after 9, I dozed off. We had a brief spell of high winds during which the tent did fine (the wind passed right through it) but sleeping was hard on account of the noise. When I woke up the next morning around 6AM, with the sky already lightened (though the sun still hidden), it was actually too warm inside the sleeping bag!