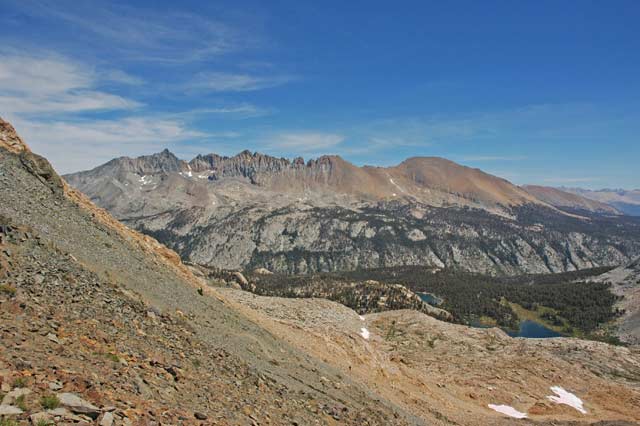 The sun took its time rising. When we got up, around 7AM, it was just beginning to light up the far side of the lake. We had a light breakfast, pumped some water for the day, and set about arranging the day pack for the day. In the process, a deer, perhaps the same one we’d seen the night before, leisurely wandered by our camp, nibbling on bushes and things.

Our intended destination (after adjustments) was Black Rock Pass, the same pass we’d seen the day before from atop Glacier Pass. To get to the trail though, we would have to go cross country for a bit.

As usual, this proved easier said than done. Talus fields that looked easily passable from a distance proved something of a pain to navigate. We finally gave up trying to do a traverse along the side of the valley, and wound up following alongside the stream. This was not only much easier, but we passed through some amazingly lush meadows, and not a few wildflower patches. We left the tent around 8:30AM. It took us until a bit before 10 to reach the actual trail. It wasn’t as easy to find as we’d expected, but our strategy of aiming for the tree patch, through which we knew the trail passed, worked quite well.

The boots again were causing blisters, but there wasn’t a lot that could be done about this. The trail was well-marked, but narrow, and made wide sweeping switchbacks up the rocky slopes. In a few spots, small avalanches had eaten holes into the side of the trail. From the camp to where we picked up the trail, we’d descended several hundred feet, and ascended about a hundred. From here, it become a steady ascent. There was a cool breeze coming off the upper part of the mountain, so the sun, despite the lack of shade, wasn’t too bad.

Going up, the vegetation became continuously sparser. The trail also became steeper above 11,000 ft. and the switchbacks shortened. We saw nobody on the trail above us.

We finally crested Black Rock Pass (elev. 11,800 or so) just before 11AM. The views from the top were truly grand. The Kaweahs, in their different red, black and grey rock, were quite imposing, and didn’t seem at all near. Between us and them were a small constellation of lakes, and the deep walls of Big Arroyo canyon. More towards the East we could see the outlines of Kern Canyon, and the eastern Sierra, including what was probably Mt. Langley. More to the south on the other side of the divide we could clearly see Sawtooth Peak, and 3 lakes: Columbine, Crystal and Spring. Below us, on the Kaweah side, a number of hikers could be seen slowly ascending toward the pass.

This was the Great Western Divide (admittedly a bit of a misnomer, since the major divide is actually between the eastern Sierras and the central part we were looking at).

Sitting in a small notch above the pass, we rested our feet, nibbled on snacks, and finally got up again to start using the cameras. I found a marmot perched on a very interesting viewpoint. The ridge itself was actually reasonably flat, so you could go along it a good ways. When all 3 cameras had been duly exercise, we scrambled back down to the trail and asked some passing hikers to take our picture. They were from New York. Small world.

The descent was much easier on the feet than the ascent. Still, going down 1,800ft. takes time. A few large clouds had begun to move across the sky, making the lighting change dramatically from one moment to the next. When we finally reached the point where we’d joined the trail, we decided to try a different approach to return to our camp: cross the creek and aim for what looked like a trail on the other side.

This we did, but the other trail proved something of a mirage. So we were reduced to scrambling again, clambering over rocky ledges, attempting to cross through stands of bushes, and so on. It was tiring, and I was none too pleased with our constantly changing course. When we finally did crest a small hill by the head of Spring Lake, I was very grateful. It had taken us almost an hour just on the cross-country section.

In need of a rest, we had sat in some (by this point scarce) shade, and ate the remainder of lunch. After some discussion, it was agreed that we would return via Glacier Pass, and not via Timber Gap. The deciding factor for me was the likelihood of mosquitoes at camps farther down, a problem Spring Lake basically didn’t have.

Since we weren’t going anywhere in particular, I suggested walking around the lake. This proved a fun, if somewhat longer than expected diversion. It may have been a small lake, but it was plumb with inlets and curvy shores. We passed through small meadows, below cliffs, through forests, and even across a snow field, not to mention fording innumerable small streams. By the time we had seen the lake from all sides (and discovered that it contained fish) it was almost 6PM.

So we could in good conscience cook dinner (a turkey-based freeze-dried dish). The butane stove once again proved sufficient for the task, only this time we added less water, so we got a stew, rather than a soup, out of the operation. We also had to pump a lot of water so as to have everything ready for an early start the next day. After nibbling and packing for a bit, we went into the tent. No problem falling asleep not long after 8PM. Guess exercise really is the best relaxant.