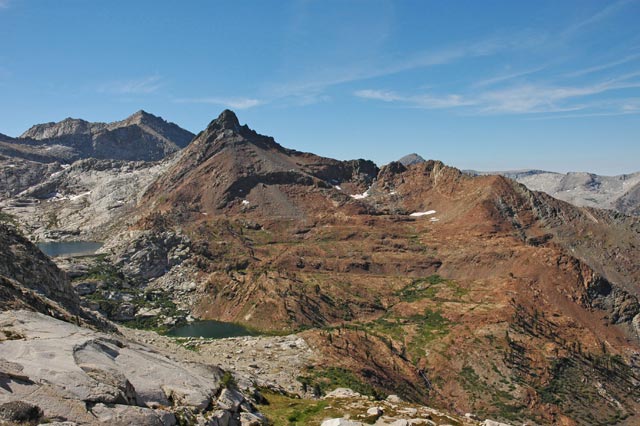 We didn’t wake up quite as early as planned, so by the time we had gotten the tent more or less emptied and ready to pack up, the sun was peeking over the other side of the lake. As we ate breakfast, our friendly deer (or perhaps his cousin?) wandered by again, still largely oblivious to our presence. After a few granola bars, we were ready to attempt the return. It was just about 8AM

The trail going up from the other side of Spring Lake wasn’t too hard to find, but staying on it required continual care. After the initial ascent over the rock hill directly above the lake, we emerged in the morning sunlight, although we had some occasional shade for a while longer. The marmots were plentiful in the meadow, where we temporarily lost the trail. I counted 3.

Climbing across the meadow was actually pretty relaxing, and not too steep. Reaching the other end around 9AM, the trail began steep switchbacks up the talus slopes, and we once again lost it, this time recovering it only just below the main snowfield.

Climbing the snowfield was a challenge, but it felt far less difficult than descending had been. The 2 ski poles I had helped a lot though. As for the small class 3 section we’d had coming down right above this spot, we found an alternate rock to climb up, with no exposure, or need to drop the packs. Shortly after 9:30AM, we reached Glacier Pass.

As this was the morning, the views were considerably different from when we crossed two days before. We could definitely see bits of the trail on the other side of the valley, going up toward Black Rock Pass. Above that ridge, the top parts of the Kaweahs were also visible. We took a few pictures, had a snack, and determined what to do.

In a bid to make the return more interesting, and stay on a better trail, we elected to try and join the Sawtooth Pass trail, and descend via Monarch Lake. Around 10, we began traversing the white sand slopes on a reasonably well-marked path.

The problem with this descent was not that there were no paths, but that there were several. Finally, one promising pseudo-trail disappeared altogether, and we spent nearly half an hour scrambling down rocks and gullies to regain the main trail. Meanwhile, we passed a dizzying array of wildflowers, surprising given the sandy dry environment.

Once back on the trail, the remaining descent toward Monarch Lake was pretty straightforward. The lake, at 10,200 ft, shimmered a deep green. We weren’t alone at the lake either: good quantities of fish could be seen darting about. Sadly, mosquitoes were also present.

From Monarch Lake, we had a good definite trail. It was straight, a shallow grade, had no switchbacks, and had obviously required a lot of work. It traversed past a long slide areas of loose reddish rock, to return us, for the first time in quite a while, into a respectable coniferous forest.

In the forest, the trail changed character again, becoming all switchbacks. We saw our first hikers of the day, a pair who’d been going 6 days on a circuit to the eastern Sierras and back. One guy was wearing sneakers. Wow. Soon more hikers (mostly going up) followed. Ground squirrels and small birds were abundant, and we saw yet more marmots in several spots. The shade was very pleasant, as the day had become quite warm.

Emerging from the forest finally (I’d been counting altitude) at the crossing of Monarch creek, we stopped for lunch around 1:30PM. My blisters were doing okay, but I was pretty tired, so the half hour spent sitting under the trees by the stream was certainly welcomed.

Once finished, we resumed the descent. We were now on the dusty slopes below Timber Gap and Empire Mountain, and the heat was oppressive. Somehow, the last 700 ft. of descent felt like forever, even though we could see the parking lot becoming visibly nearer. At 2:30PM, we staggered into the Sawtooth Pass parking lot, hot and tired. We were followed by an equally tired group of hikers, one of whom was still nice enough to take a photograph of us at the trailhead. End of hike.

It took a good hour to change into clean clothes, retrieve our food from the bear locker and get ourselves and the car cool enough to think about leaving. We stopped at the ranger station on the way out for postcards, and the campground for bathroom and water. As the car was making disturbing screeching noises (as it had coming up), I let my dad drive.

The drive out from Mineral King was noteworthy mainly because it become steadily hotter, and because, as we were descending, we went somewhat faster. When we finally reached highway 198, around 5PM, I was feeling quite carsick. We had some nice views too, but the haze over the Central Valley tended to limit visibility in the direction we were going.

In Three Rivers, we stopped to pick up something cold to drink. The temperature was in the 90s, so it was more than just a question of comfort. Martinelli’s has rarely tasted so good.

From Three Rivers, I drove, continuing on 198 west, past Visalia, through Hanford, and continuing in a long and incredibly straight fashion towards I-5. We reached it around 6:30PM, with the sun offering a blinding glare in the west. From I-5, it was a long, but not quite so straight drive north. The trucks were numerous, and so I spent a lot of time in the passing lane, or attempting to avoid slipping into the newly paved margin. Around 7:30PM, I managed to get off at the wrong exit, getting the road right, and the direction wrong. Chalk it up to a long day.

On 152 west, the sun ceased to be a major issue, setting below the nearby hills. Traffic was considerable, but brisk, and we made good time to Gilroy. We arrived there around 9PM, with the sun having definitively set, and me tired enough to be happy to give over the wheel. The final stretch, up 101, then up 280, and finally home via 92, we listened to the trials and tribulations of Rumpole, the defense lawyer, in a libel action. A pleasant story, but the cassettes were hard to dig out of the overcrowded back-seat pouches.

We arrived back in HMB around 10:30PM. It was the usual 65 degree weather, which seemed downright cold after having baked most of the day on the trail and in the car. Once home, there was nothing for it but to have a quick dinner, and start unloading all the accreditions of the trip from the car. Went to bed with plenty more of that left to do tomorrow.