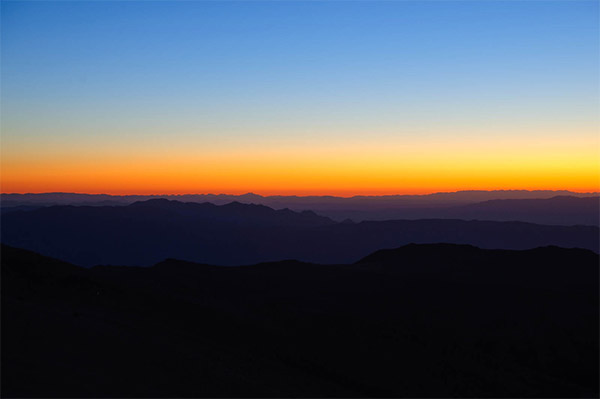 Just after returning from Europe, Sassan and I joined a number of photographers on the Foothill Photo Club’s annual trip to the Ancient Bristlecone Pine Forest in the White Mountains of eastern California.

Day 1: Driving to Crooked Creek in the White Mountains.

Day 3: Photography at the Patriarch Grove and driving back.

It’s a long way from than SF Bay Area to the White Mountains. After some late packing, we finally left home around 10AM There was more than a little traffic on 580 heading east into the central valley, despite being well after commute hours. Going toward Yosemite, we found Old Priest Grade closed for repaving, and had to take the slower highway route for the first time in several years. Yosemite and particularly Tuolomne Meadows looked very dry, and we could smell the residue from wildfires in several parts. After the Tioga Pass, we had a long stretch south on 395, to reach Big Pine, which we finally did just before 6PM.

At Big Pine we split, heading east up 168 toward the Westgard Pass. The area was arid and mostly barren, and even at 7000 ft., the temperature was still in the high 80s. We saw almost no other traffic on the road. Turning off at White Mountain Peak Road, we followed the road as it wound its way, eventually to a high ridge. There we had an excellent view of the sun setting over the Sierra Nevada. We paused at a turnoff to enjoy the colorful afterglow and take photos.

Past Schulman Grove, the road almost immediately turned to dirt. It took us a very bumpy 30 minutes to cover the next 10 miles or so to the Crooked Creek turnoff. It was a bit after 8PM when we arrived at the UC Crooked Creek facility, elev. 10000 ft. in the middle of the White Mountains. Although it is used primarily by researchers, others can book and stay when there is space (it has dormitory-style facilities). We met the other members of the photo club in the dining hall and as we were late, enjoyed the leftovers from dinner. The photo club was the only group there for the weekend, so we had no trouble getting a room, and quickly called it a night.

Wake up call the next morning was 5AM. We all had a hurried breakfast in the dining hall, packed our gear and lunches, and set off a little after 6AM for Patriarch Grove. By the time we had driven there and unloaded our stuff, the sky was lightening considerably, and we had only a few more minutes of predawn lighting before the sun appeared over the eastern horizon. The area had not only its share of gnarled bristlecone pine trees, but an excellent view to the east over the mountain ranges and valleys of western Nevada.

Around 9AM, everybody was ready for a some new scenery to photograph, so we drove back a short distance and stopped near where the road went over a pass. Here we had fewer trees, and more barren terrain, as well as a view over the Owens Valley to the Sierras. In spite of the late season, there were still sizable patches of snow on the higher peaks.

Next, Sassan and I left the group to have a go at White Mountain Peak. Continuing down the road to the locked gate, we parked next to a few other cars at a lot next to the ridge near 12000 ft, well above the tree line. The first half an hour we followed a well-maintained road on the east side of the ridge to the Barcroft Research facility, where we saw some researchers as well as a small flock of sheep. Beyond the facility, the trail narrowed, and we had a short steep section to take us past the observatory.

Distances without a sense of scale can be quite deceiving. We found that from the observatory to the beginning of the peak itself, while appearing not terribly far, took the better part of 1 ½ hours to cover. The area in between formed a long, reasonably flat plateau, covered in boulders and dry grass. Toward the end, we met a couple of people, including a guy suffering from altitude sickness. It was quite warm.

The climb up the peak itself felt interminable. Switchback followed switchback and false summits abounded as we climbed the east side of the peak. The trail was no longer a wide well-maintained track, although presumably some type of 4WD vehicles drove up it from time to time. Finally, around 3PM, we rounded the final switchback to arrive at the top, where there was yet another research building (and sounds coming from it suggesting an experiment in progress). We soaked in the views, and wound up in conversation with a hiker who lived nearby and had explored much of the surroundings. Haze limited visibility a bit, but we could still make out the Minarets to the north and what might have been Mt. Whitney to the south, along with countless valleys and peaks between.

Fortunately, returning was much faster. Toward the end of the long plateau, the sun had dropped far enough to make long shadows, and the temperature had certainly cooled off. Past the observatory, we were in the shadow of the peak and only shortly after we passed the Barcroft facility, the sun set completely. It was already quite cold when we reached the parking lot around 7:30PM, and saw several folks attempting to set up tents as winds became stronger.

We arrived at Crooked Creek at 8PM, again late for dinner. The keeper had kindly kept the leftovers out for us, so we ate well nonetheless. The rest of the group had stopped in a few other spots for photographs before returning for an afternoon of rest. As the facility had reasonably internet access, one of the photographers took the opportunity to chat online with the Foothill instructor who had started the tradition of visiting the area each year. We went to bed around 11PM.

We again got up early to see the sunrise. This time, we drove slightly beyond Patriarch Grove, to a spot overlooking the grove and the mountains to the east. We were in time, and everybody took a good many photos before the sun came up. It was however quite chilly, and I regretted not having better gloves. After an hour or so, Sassan and I hiked up Sheep Mountain, the peak directly opposite. It was a short scramble, but with good views on both sides, and fortunately we were early enough that the haze in the Owens Valley was not too obvious.

Next we returned to Crooked Creek to pack up and check out. After packing and cleaning the dorms and dining room, we lined up for a group photo. Of course, taking photographs of photographers proved more complicated than expected (harsh lighting, problems with flash), but we managed, said our goodbyes, and set off. Some of the group planned to go to the Alabama Hills near Lone Pine for more photos, and some even to continue on to Las Vegas for the annual PhotoshopWorld conference.

Our progress returning was slow, thanks to the bumpy road and frequent pauses for photos. We made a longer stop at Schulman Grove, to walk around and see a few more of the trees. Unfortunately, the visitor’s center had burnt down the year before, a victim of anti-government arson (although happily none of the ancient trees were damaged) so we didn’t get the full set of information on the bristlecones themselves.

The rest of the drive was long but uneventful. We reached the highway, headed west to Big Pine, and continued north up 395 to Lee Vining. We opted to take a late lunch around 4PM at Tioga Lake, just below the pass, as it was cooler there than in the Owens Valley. Traffic in Yosemite was sluggish as expected, and the final stretch back to the bay area wasn’t much better. We reached home a bit past 10PM, having covered some 800 miles of driving in 3 days.