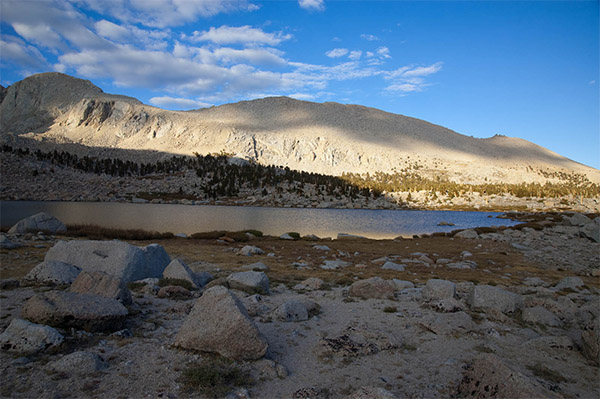 Midway through October, I joined a weekend Sierra Club hike for my first climb of Mt. Langley in the southern Sierra.

Day 0: Driving to near Lone Pine.

Alex, Sassan and I met in Cupertino around 3PM for a carpool for the drive to the eastern Sierra. We opted to take the northern route via Tracy and Yosemite, and had more than our share of evening traffic until we reached the central valley. We reached Yosemite an hour or so after sunset and Lee Vining around 9:15PM. There we learned that the other car of hikers was having trouble, forcing George and Rudy to stop in Bakersfield. We finally arrived in Lone Pine near midnight, and camped at the Tuttle Creek BLM campground, a few miles outside the town.

In spite of the low elevation, it was a cool night and we were up with the sun just after 7AM the next morning. Unfortunately, the other hikers’ car was still having problems, so they couldn’t join and had to return, meaning it was just the 3 of us for Langley. We had a warm breakfast, broke camp, dropped by the (new) Lone Pine Ranger Station for a wilderness permit, and made the long drive up to Horseshoe Meadow (10000 ft.). We left the trailhead a bit past 10AM.

It was still cool, although quite sunny, as we followed the meandering trail up and down across small valleys and through groves of gnarled pine trees. We saw few people, and were quite surprised to find Arun, Linda and a 3rd PCS hiker at the New Army Pass/Cottonwood Lakes junction, 1 ½ hours in. Turns out they had come (independently) to do Cirque Peak.

From the junction, we followed the New Army Pass direction, ascending steadily for around an hour, passing another marked Junction (South Fork Lakes) and cresting a small ridge to arrive at a large meadow/marsh and Cottonwood Lake 1 near 11000 ft.. There we stopped at 1PM for lunch, admiring the views and trying to avoid the cold breeze that was blowing off the lake. Aside from a few birds, we had the lake to ourselves.

After lunch, we left the main trail following a use trail through a small forest to the edge of Cottonwood Lake 3. This was a long lake, and we went along the shoreline, seeing a couple of folks fishing before we reached the far shore. There was a brief climb, after which we turned up the valley that included Cottonwood Lake 5 and (Old) Army Pass. We opted to set up camp under a small stand of trees along that lake.

Once we’d taken a short rest and unloaded the packs, we took a stroll around the nearby area. The broad end of the valley was dramatic and we explored a few of the nearer lakes and admired the gnarled trees and views down where we’d come from. Because of the high western wall of the cirque, the sun set on us around 5PM, so we had a quick dinner as temperatures dropped rapidly, and went into the tents before 7PM.

The night was cold, and a bit windy, so none us slept terribly well. When began getting up at 5:30AM, there was no sun, but the sky was already lighting up. After a warm breakfast, we arranged daypacks and by 6:30AM we were on the trail just as the sun began to peep over the horizon. We made good time following the switchbacks toward Old Army Pass. The trail was surprisingly well-maintained, although it was easy to see how a little late snow or a few avalanches could make it effectively impassable.

We crossed the pass at 7:15AM leaving the shade for the sun. The vistas to the west were grand, going all the way to the peaks above Mineral King. From there, we followed one of several use trails northward a little below the ridgeline. After nearly an hour, our trail dipped slightly, and forked. We took the branch that appeared to go around the southeast side of the peak. Progress was slow as the trail moved from rock to what was essentially sand. We had great views to the east of the Owens Valley, White Mountain range and beyond into Nevada.

By 9:30AM the trail had basically disappeared and we had arrived at a collection of large boulders 200 ft. below the summit. It took a surprisingly long time to find a path up and through these, including a couple of 3rd class moves, but around 10AM we slipped through the finally notch onto the broad shoulder of Langley.

We stayed on the peak for a while, admiring the views, taking photographs, eating snacks, and looking at the log books. We could see White Mountain Peak far to the north, as well as the much nearer Mt. Whitney. A little after 11AM, we began our descent.

Opting for an easier route down, we went farther to the west than we’d come up. We still encountered a couple hundred feet of rock and boulders though, before we made it back to the sand of the lower slopes. By 12:30PM we were on the ridge. We saw 3 people on their way up, although they were taking a different route than we had. Although the ambient temperature was cool, the strong sun made it a warm afternoon. From the pass down to camp was actually in the shade, which explained the continued existence of small snow patch above the trail. We reached our camp a little after 2PM.

It took a little time to dismantle the tents and pack everything up. We said goodbye to Cottonwood Lake #5 at 3PM to begin the long descent back to the trailhead. From Cottonwood Lake #3, we took a slightly different route down, following the main trail (not a use trail) through a wood and past a small pond, before leaving the trail altogether to go through another wood and a marsh to Cottonwood Lake #1. In spite of the afternoon heat, we found a stream that had ice over it in the small valley on the other side of the ridge from the lake. The final stretch of the trail seemed interminable as we went up and down and up and down through the pine forests, but we did finally emerge at Horseshoe Meadows around 6PM, a good while after the sun had set on our side of the mountains.

Before leaving, we encountered some folks having trouble starting their car. Alex had jumper cables, but their Chevy Suburban’s engine was too big or the connection for the cables wasn’t good enough because we had no luck. We left a little before 7PM. Stopping for gas in Lone Pine, we followed the same route we’d taken back. By 10PM we were at Mono Lake. By 11:30PM, we’d reached the other side of Yosemite. Around 1AM we stopped in Oakdale for gas and coffee. It was a little bit after 3AM when we reached Cupertino and said goodbye to Alex. Finally at 4AM we were home.