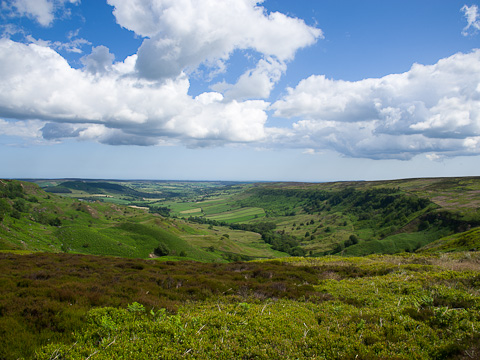 Breakfast was in a beautiful dining room, looking out across the garden at what appeared to be a beautiful clear day. It was not particularly warm either when we were dropped off at the top of the moor by the Lion Inn.

The first stretch of our walk followed the road, and we were a bit nonplussed by some of the drivers whizzing about at high speeds. I can only imagine how the poor sheep felt. We paused at ‘Fat Betty’, an ancient stone landmark, and left an offering of travel bars, per the tradition. A little further on, we caught our first glimpse of the North Sea.

We took around an hour to reach the end of Blake Moor. Here we left the road, and began to descend mostly keeping to the ridgeline. The clouds had begun to darken again, but we had a nice view out over the valley of the river Esk. We passed over a few hills, with views on either side, and then the rain began. So we put on our rain gear. As soon as the rain gear was on, it was scarcely 5 minutes before the rain stopped again.

We ate lunch sitting on a little hill looking out over the Rosedale valley to the south of us. After lunch, we resumed our downward plod. Another hour or so and we arrived in Glaisdale, a village officially ranked as among the best in England. It seemed a pleasant place, although we somehow missed the grocery store. We did however meet a number of colorful, if largely silent inhabitants: the wombles. We found these curious looking characters dressed in all manner of different costumes, with one seated or perched in front of almost every house. We also found a few human inhabitants, including a policeman who seemed to be in the process of teaching some youngsters the protocols involved in riding a bike.

From Glaisdale we descended to the tiny hamlet of Arncliffe Arms. There we passed a small train station that seemed deserted, save for an official looking sign warning that anybody who left the gate to the station open would be on the line for 1,000 quid. We made sure to close the gate after taking our photos.

Continuing on, we followed a path into the woods, which we had entirely to ourselves. It was fairly dark under the trees and after half an hour it was hard to tell where we had go to, but we emerged on a road, and followed it downhill to the town of Egton Bridge. Here we crossed the River Esk on stepping-stones, a task made easier by the careful placement of the stones and the calm, slow flow of the river. We were in a sufficient hurry not to stop at St. Hedda’s church and look at the remains of Nicholas the martyr (another casualty of the English reformation), and proceeded directly through the remains of an old estate that currently seemed to be mainly a home to a number of donkeys and some farm equipment.

Around 4PM, we reached Grosmont. After passing down the main street, we stopped at the Station Pub for a drink, and admired the heritage steam train that passed along the railroad track in the center of the town. But the weather was turning and Bridget, Chris, Michelle and Mark all had another 3 miles left for the day, so we said goodbye and set about checking in to our bed and breakfast. The rain came down heavily for the next twenty minutes, then disappeared for the rest of the day.

We soon discovered that Grosmont was a much smaller town than had initially appeared when we found the only grocery store had closed at 5PM. We wandered down to the railroad museum just outside of the town, but that too was closed for the day, so we returned to the pub to settle the matter of dinner. Inside, we met a group we’d seen 3 days before on the trail. This was their second time doing the coast-to-coast route, and they were enjoying it every bit as much as their first one.

After dinner we returned to our B&B. The proprietor we soon learned was a former railroad engineer and he had a wealth of information to tell us about his time on the railroad, as well as his adventures cycling around England and the continent, which even a bout with cancer had not stopped. We had a good chat before going to bed. Upon the news that we intended to be up at 6AM, he said that he’d be up a 5:30 to prepare breakfast. We insisted this wouldn’t be necessary, but he said it was nothing he hadn’t done many times before, while working on the railroad.

One thought on “Day 13 – Rosedale Abbey to Grosmont”