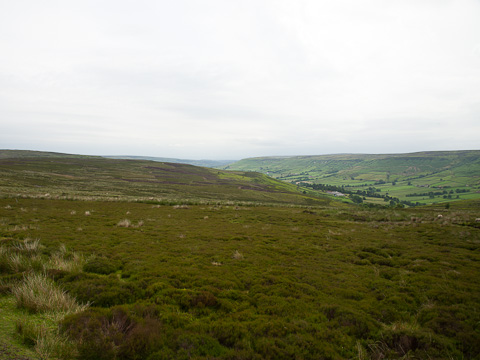 For once, I was pleased to see that it was overcast when I went down for breakfast. Despite being the only guest, I received all the benefits of good English breakfast including some amazing slow-roasted tomatoes and excellent sausages. So fortified, he deposited me back at the same parking from which he’d picked me up the night before. The others had recently arrived and were still adjusting their gear. It was 9:30AM.

From the café, our route was again up as we climbed a succession of 3 separate hills, each more substantial than the next. The clouds kept things cool for the ascent although it did limit our views out across the moors and the escarpment. The trail became surprisingly rocky in a few sections. At one point we encountered a group of schoolchildren in outdoors gear, complete with helmets, heading down the trail. We saw another group in the process of climbing up the escarpment. They looked to be having fun.

Aside from bushed and the occasional berry, the moors did not have many features. We saw a few sheep here and there, but not the large flocks we’d seen grazing earlier in the grasslands. From the top of Clay Bank, the most substantial of the hills, we had a fairly wide view across Yorkshire, both north toward Middlesbrough and east across the moors. After the schoolchildren, we did not see anybody else on the trail.

We took a fairly brief lunchbreak where the trail met an old railroad line that had since been demolished. Continuing along the top of the moors, we went more or less due east. Mark’s feet were bothering him somewhat, and we were all pleased to finally have a view of the Lion Inn when we turned a corner around 3PM. Somehow the walk ended up seeming longer than the 11 miles it was supposed to be.

At the Lion Inn, we warmed up (it had become quite cool), rested our feet, and around 4PM the proprietor of our guesthouse came by to fetch Bob, Sassan and I. He was very friendly, and even agreed that he could bring us back up in the evening to join the others for dinner. The drive down to Rosedale Abbey was pleasant and informative, but a little jarring, for the road twisted and turned around to the point that I completely lost my sense of direction. The August Guesthouse was a well-appointed building slightly above the level of the town at the bottom of the alley. We were all happy to have a quiet afternoon to rest and recuperate.

We caught a ride back up to the Lion around 7PM. The others were comfortably ensconced at their B&B across the road. The special of the night was the Stilton Cheese melt. Having missed out on the previous night’s special, we let Mark order first. Naturally, there was only enough cheese for 2 people to order the dish. After dinner, we went outside and saw the ending of a gorgeous sunset. Naturally, my appropriate camera lens was back at the hotel. We enjoyed a fairly restful night.