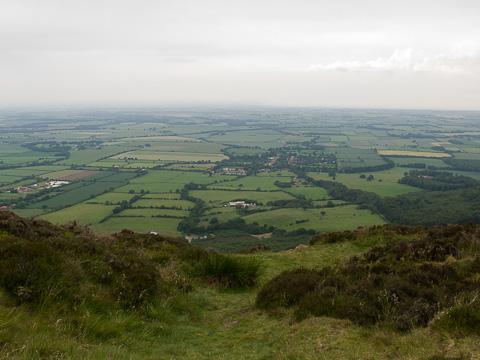 When we got up in the morning it was cooler. We enjoyed a slightly simpler breakfast than the usual, but still about twice as large as one would usually have at home. However by the time we were ready to leave, it was again looking to be an unpleasantly hot day. We said goodbye to the Canadians, to Farmer John, and to his friendly collie, and resumed our eastward trek a little after 9AM.

The trail was much the same as the previous day. We criscrossed fields of grain and grass, occasionally following roads and even more occasionally seeing other folks. Around an hour into our walk we crossed a railroad track at a level crossing. The train came through 3 minutes later. The temperature rose to an unpleasant level.

Around 11AM we reached the A171 highway. Unlike our previous encounters with busy roads, this one offered no option but to run across. Fortunately it was a divided road with a median and after a few patient minutes we were on the other side. There we found ourselves in the town Ingleby Arncliffe. At the Blue Bell Inn, we all got cool drinks, then continued on.

We crossed a second highway on the other side of the town, before beginning our first real ascent since before Reeth. Chris wanted to visit the Mt. Grace Priory, another victim of Henry VIII, and Bob, Sassan and I joined. The other continued straight ahead, promising to wait at the top of the hill, near a large aerial antenna.

The priory proved an extensive establishment. We took a quick look at the museum, then headed outside to have our lunch. Apparently thanks to a lord in the area who had purchased the place at auction from the crown, it had avoided the typical destruction of other similar buildings (most of the monks were not as lucky – they were executed). We wandered the grounds including a reconstructed unit similar to the dozens that had housed the monks in bygone days.

Still, we didn’t want to be left behind, so around 1:30PM we left to continue climbing the next hill. We began in the woods but soon emerged into the open. The views were compromised by a thick haze but at least the temperature was beginning to drop. We discovered numerous patches of some type of blue berry. They were excellent. We met the others just beyond the antenna.

The Yorkshire moors are a series of broad, woodless hills. We were on the northwest edge of the moors as we proceeded along our route which had now joined another well-known long-distance trek: the Cleveland Way. The trail dropped down, reascended, dropped down again, and after a lengthy period in the woods, began our final ascent of the day. The fading heat helped a bit, but it was still a hefty climb. In one field, I saw my first hare – a giant rabbit bounding along with seemingly inexhaustible energy.

Once we reached the top of the moor again, we again had a view. We more or less skirted an escarpment that marked the western boundary of the moors. After a fair distance on top of Carlton Bank, we spotted a large building. This turned out to be a lodge for a former glider club. Given the height of the escarpment it wasn’t hard to see why they’d chosen this spot to put the club. We were all happy when caught sight of a road, and after a short descent crossed it and arrived at Lordstone’s Café.

After a brief wait cooling off outside the cafe, the proprietors of the hotels where we were staying drove up to give us a lift. The ride down to the village of Chop Gate was not too far, but I was very happy not to have to walk it. Owing to complications with booking, everybody but me stayed in one B&B and I stayed in the other. This proved not a bad thing at all for the proprietor where I stayed was a very friendly and well-traveled fellow and was happy to explain all about the local scene. In addition to operating a B&B in the English countryside, he had also been a royal marine and policeman in London, and had hike part of the Pacific Crest Trail in California.

Once I had deposited my bags and showered, I was introduced to their cows and sheep. Then I headed down to the Buck Inn to see the rest of the group for dinner. Per recommendation, I had venison. So did several other people, but unfortunately they ran out by the time Mark ordered. So he got stuck with casserole instead! I was happy to go to bed shortly after dinner.