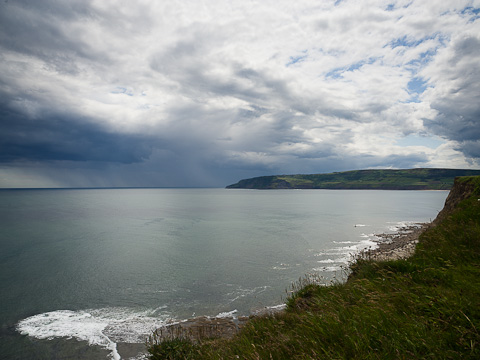 Getting up at 6AM was surprisingly not so difficult. It helped that it was quite light outside, and appeared to be the beginning of a beautiful day. It also helped that the steam train had already made its first jaunt through town. The proprietor was true to his word, and we had a good breakfast before setting out up the steep hill to Littlebeck.

In an effort to avoid the sort of miscalculations that had led us astray on the first day of the trip, I kept both map and GPS handy, and things on the ground seemed to more or less accord with the map. The hill was quite steep, but after 40 minutes or so, we had crested the top of the moor and were being treated to the sounds of the busy A169 highway. We only had to walk alongside the highway for ¼ mile but it was enough. Then we followed a narrow trail, joining the main road to Littlebeck not too far on. We were just beginning to wonder which farm we were supposed to pause at when we saw Michelle and Mark. We continued on and found Bridget and Chris at the bottom of the hill, by the creek.

The next bit of trail paralleled the creek, taking us along a wooded hillside, past a cave known as the hermitage, and down to bridge. Across the bridge we found the charmingly named ‘Midge Hall’. The route then continued through the wood, returned to the east bank of the creek, and eventually emerged near a small car park. Here we returned to the road, climbing up a hill past several farms including one with a very vocal watchdog, and cresting with a view that extended all the way out to the ocean and the seaside resort of Whitby.

After a section next to the B1416, we crossed and began to head directly toward the sea. It was a lot further than it looked, and the moors gave way to cultivated fields. Soon our trail was swallowed up by tall hedges on either side. We meandered in this fashion for a fair distance, finally emerging near the town of Hawsker. We took a short rest in the center of the town on some well-positioned benches, and watched a driver-in-training navigating the turns and roundabouts of the main road through the town.

Our trail then proceeded to take us down a narrow country lane that somehow opened up on a massive RV park. Admittedly it seemed a rather nice RV park, being quite clean and offering an excellent view of the ocean, but I couldn’t help feeling that it was out of place. Still, we made our way through it, and a few hundred yards further along we reached the sea.

Or rather, we reached the cliffs. The sea was there all right, a few hundred feet below us. The trail took us south, following the contours of the bluffs. After a few minutes, as if on cue, the darkened section of sky proceeded to expand on us, and it started to get wet. After a pause to put on jackets, we continued.

The last few miles of the coast to coast trail kept to the bluffs. We had views out over the ocean, but also inland at the nearby farms. Some of the fields above the ocean had cows in them. We passed a good many other walkers, but most seemed to be just out for a pleasant stroll.

At length, the town of Robin’s Hood Bay appeared before us on the coast. The trail deposited us on a street surrounded by well-maintained vacation houses, and this we followed down into the center of town. We found numerous groups of tourists, many of them schoolchildren making their way down to or up from the beach. We followed the downward group and at about 2PM we crossed a small street onto the sand. Those of us with stones from the west coast (Bridget, Chris, Michelle and Mark) deposited them in the water. We took a group photo. And that was the Coast to Coast walk.

One thought on “Day 14 – Grosmont to Robin’s Hood Bay”