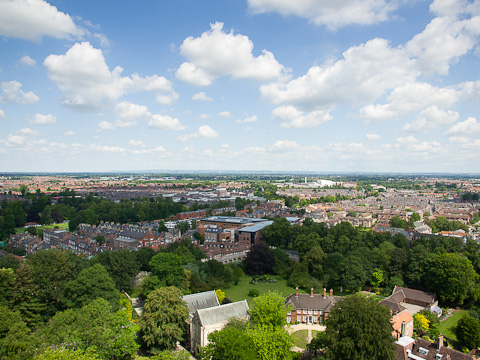 Our journey did not in truth end at Robin’s Hood Bay. First, there was the matter of returning to Kirkby Stephen. This we did thanks to the luggage service’s bus. After a few hours of exploring Robin’s Hood Bay, including a pause at the Victoria Inn pub to celebrate, we caught the bus around 4PM. The bus driver was a talkative fellow, so I learned a fair amount throughout our 2 hour drive to Kirkby Stephen. He was also quite skillful, maneuvering the van up and down narrow roads and streets. Despite it being almost rush hour, we saw little traffic save on one major motorway.

To celebrate the successful completion of the Coast to Coast walk, we decided to have dinner at the Croglin Castle, a restaurant in Kirkby Stephen known for its vegetarian shepherd’s pie. The fact that establishment had its own brewery was merely an additional incentive! After an excellent dinner (everybody had the same dish – shepherd’s pie), we were greeted by some familiar voices – 6 members of the same hiking group in the bay area were also doing the Coast to Coast walk too, but 8 days after us, so they were passing through Kirkby Stephen on the way to Keld. They had gone as part of a tour, and apparently had had much drier weather than us. We exchanged stories until quite late.

The next morning was not particularly relaxed. In addition to repacking our luggage (we’d left a suitcase in Kirkby Stephen the first time through), we had to figure out our next step. Michelle and Mark were heading back to London. Chris and Bridget were going off to see a bit more of the Lake District. After some back and forth, the remaining 3 of us agreed to go to York in the hopes of visiting a scenic, but still smallish, city. Making rail arrangements proved complicated too, but at length the taxi deposited us at the station, Chris and Bridget said goodbye, and we caught the same train we’d taken on our first day in England, only this time back toward Leeds.

The train ride was scenic, as it had been on our arrival. Unfortunately, we were now saddled with a full collection of luggage, which hampered movement considerably. At Leeds, I got tickets to York, and when the express train to York arrived, we had to quickly load ourselves and our luggage into it. We nearly left behind several pieces of baggage. Unloading in York was also hurried. Using a payphone, I managed to find a hotel, but getting there again required the assistance of a taxi. A day before the one mile walk would have been a pleasant diversion, but now it required a car to complete. It was a relief to drop the luggage at Astley House, and venture out into the town unencumbered.

York showed itself to be, as advertised, a very pleasant old city of manageable size. Without a set end-point determining our movements, it was difficult to decide what to do, so we did a fair amount of meandering through the old town. After two weeks spent mostly in towns that could be walked across in 5 minutes, we found ourselves beginning to get lost in the maze of small streets and intersections. The most interesting place we did visit was the railroad museum, which included some magnificent old steam engines as well as a great deal of history. This was enough to leave us hungry, and we had dinner at an Italian restaurant.

When we had finished dinner and returned to the hotel, there was the question of what to do for the following day. Again I thought back to our walk, and somehow it did feel that in spite of the difficulties of finding, following and completing the route, life looked more complicated now that we were no longer walkers on the way to the next town, but tourists, looking for something interesting, but not sure exactly what that something was.