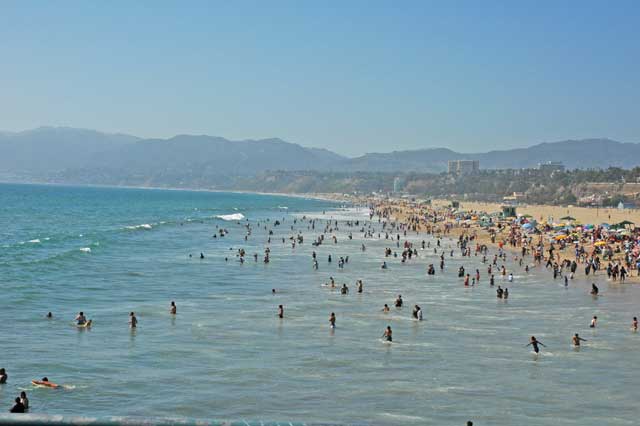 Today’s plans didn’t require being anywhere before 11AM. So I took the opportunity to take an extended jaunt along Wilshire Boulevard. I started by walking down to the bus depot, and down to Wilshire, where I’d been the day before.

Proceeding east along Wilshire, in the general direction of LACMA (Los Angeles County Museum of Art) some miles distant), I passed through some very odd bits of LA. There was of course the extended Westwood area, which was mostly large condos, and occasional hotels and businesses along the road. By degrees, I slowly entered Beverly Hills, and for one lengthy stretch, passed through the golf course at the LA country club. Big thing. Took me 10 minutes to cross. At the other side, LA resumed a more familiar character: car dealerships, strip malls, occasional skyscrapers, and random palm trees. Not, I would add, a very pedestrian friendly route on the whole.

After almost 2 hours, it was clear that walking to LACMA wouldn’t do the trick, so I got a bus (correct change in hand!). I got off one stop too soon, so I was at LACMA’s overflow area, which seemed oddly abandoned. A few blocks farther north, was the real museum (not at all abandoned). Met my visitors there, and in we went.

I actually like LACMA because it’s small, but it does have limitatins. One member of our party had had more than enough classical (well 1500-1900) European art back home (which was Europe) which limited the appeal somewhat. Nonetheless, there were some neat pieces, and none of the overload I usual have from going to the Getty or the Met.

Still, you can only look at so many sculptures, paintings and pieces of ancient cookware before ennui sets in. So we had a quick look outside at the tar pits (still there, still smelly), before grabbing the bus for Santa Monica beach. This was more difficult than it should have been, as the bus unaccountably stopped and let all of its passengers of at Westwood Blvd (!), only halfway to its purported destination. So we waited for the next one.

Santa Monica is a nice town, and the cliffs about the beach have some great views. Nonetheless, for first time visitors, it’s a bit disconcerting that the whole park there basically serves as a place for the homeless to live. We found a path down to the boardwalk nearby. Weather was in the low 80s, with a slight breeze, and a clear sky. Stereotypical weather for LA.

The Santa Monica pier is also a nice spot, with shops, restaurants, a few rides, and about half a million people. We explored, I found a truly unappetizing bathroom, and we got lunch from a stand that was blaring loud annoying music. Still, the views of the beach were great. Swimmers and sunbathers could be seen for miles.

On the way down to the beach, on of my friends shinnied up a 30 ft. rope that was part of an athletic structure. Wow. On second thoughts, not having gloves, I think I’ll pass. We found a niche on the beach right by the lifeguard (who actually made us move a bit, we were blocking his view or something?). I waded into the water, but as I didn’t have a swimsuit, stopped just shy of getting completely soaked. No swimming for me. The friends were off and into the waves in no time. Instead, I wandered down the beach for over a file, teasing the waves and taking photos. Lots of waves. Lots of castles. Lots of people having a good time.

Around 6PM, we recongregated, desanded ourselves, and considered the possibilities for dinner. One of my friends had gone swimming with his contacts in, which caused problems. Still, we made our way up to the 3rd St. promenade in Santa Monica. There, we found more hordes of people, a variety of street performance, and even some pro-Israel protesters (Bomb Lebanon more? What exactly did they want? Anyways, none looked very excited, I’m guessing they’d been paid). After much indecision, we picked a restaurant specializing in seafood. Dinner was decent, and for dessert, we ordered two slices of different pies, and split them 3 ways.

Afterwards, we walked around a bit. While they were in a store, I received some medicinal marijuana literature from a passer-by. Not really very relevant for me. I mean, I certainly hope I’m not terminally ill. Everybody was in a philosophical mood as we waited for the bus back.

For a change, I got off at the right bus stop. Still, it was a substantial walk back to the dorm, and I passed a couple of drunk students having a very bizarre conversation in the middle of the road. Back in my room, my roommate was preparing for tomorrow’s classes, so I attempted to do likewise. Sleep won out over dilligence, around 11PM.