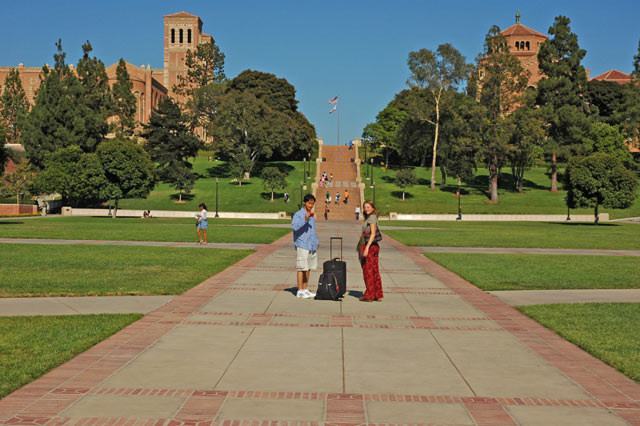 So today started, somewhat rousingly, with its usual 9AM fun. We had, all told, about 3 hours of structured grammar/vocab review, and one hour of pre-planning-for-oral-exam review. All eminently exciting. There are still a few members in the class who are, to put it charitably, behind the curve. I don’t mean that they don’t know all the material (a category in which everybody, including myself, I think fits). I mean that they aren’t able to keep track of the current topic. Which is a bit distressing, since much of the directions in the class are still in English.

At 1PM, I ran off to meet my visiting friends down in Westwood Village. It proved curiously difficult to actual arrive in the same place at the same time, but we did it. My research claimed that there was a cheap sandwich place nearby, and indeed there proved to be (cheap, in the Westwood sense). Sandbag’s was a success (in spite of the odd name). Looks like we are all mostly recovered from yesterday.

Afterwards, we trudged back to my dorm, which involved wheeling all their luggage up the hill again (previous time was Saturday), and then I rushed off to meet a professor, whose advice I was hoping to get on graduate school. The building was still in some state of construction (most of the doors inside didn’t have names on them yet). I did find the professor’s name, and presumably office, but the professor himself was notably not there.

So instead I went straight back to the dorm, and after figuring out which buses would be most direct going to the airport (still an hour and half, minimum), we went on an abbreviated tour of UCLA (abbreviated courtesy of sore feet all around). Saw the football team practicing on the field (good luck against USC guys, you’ll need it!), and then went through the central plaza. Very nice in the slightly muted afternoon lighting.

Next it was down Westwood Blvd, to sit outside by Peet’s Coffee, admiring the world go by. At 5PM, there’s a lot of world going by. Was nice to just hang out, with no particular aim. Still they had a plane to catch, so around 6, there were the usual goodbyes and we went our separate ways.

The rest of the evening was the usual mishmash of homework, studying, and trying to catch up on the wonderful world outside. It sure is wonderful… but now there’s homework to finish in the morning.