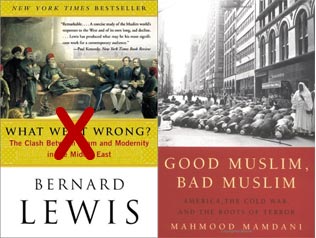 Wednesday is noteworthy because I have back-to-back seminars in the afternoon. Theoretically five-and-a-half hours of history goodness. Got up early to finish up a reading response for one of the seminars. Need to learn how to schedule myself better.

The first seminar, dealt with different approaches to constructing early Islamic history. I guess the idea that philology explains history is definitely out of vogue right now. One fellow we read was a wonderful philologist (studier of words), but wrote a pretty worthless history. Inevitably ‘Orientalism’ took over the discussion. The main problem seems to be people using the term who haven’t bothered to define it properly. As our professor pointed out, were it not for Orientalists, many of the compilations and translations that American, European and Middle Eastern scholars depend upon would not exist. So just using an undefined label as a slur is not a very effective attitude.

The second seminar seemed a lot lighter. This was in large part due to the fact that two of the articles we had to read were utter garbage. I’m sure Bernard Lewis and Samuel Huntington have made legitimately intelligent statements before, but “What Went Wrong” and “The Clash of Civilizations” are about as valuable, informationally, as the official pronouncements of the North Korean press corps.

What’s depressing is that people actual do take some of this tripe seriously.

After the discussion (which was actually about pseudo-cultural explanations, not about bashing Lewis and Huntington, fun as that might be), it was back to the apartment for me. Wanting to have something novel for dinner (ie not rice), I gave spaghetti a try. Wow. My first time cooking spaghetti, ever. Seems to have turned out okay. The hardest part is getting all the spaghetti into the pot, since it’s not really big enough. The best part: I have at least 3 more meals waiting in the same pot. Simplifies cooking a bit.