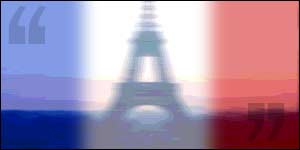 A solid hour into French this morning, we turned to the topic of ‘verlan’, the language of French youth originating in the impoverished slums around Paris. Basically, ‘verlan’ reverses the sound of words. We read a rather neat poem which alternated back between ‘verlan’ and regular French. A few examples:

And so on. Essentially, the sound is reversed. Supposedly it was originally constructed so that ‘les flics’ (the police) couldn’t understand it, but it has since taken on a life of its own. It’d be as if gangsta’ talk here had become common among youth from all backgrounds. Not bloody likely, given that we’re such a melting pot and all.

My other course was a seminar, in which we discussed a very methodical book on the Ottoman empire subtitled ‘structures of power: 1300-1650.’ The book itself featured chapters entitled ‘The Army’, ‘The Palace’ and ‘The Provinces.’ It’s funny how sometimes structure conveys substance: this is a case where the author clearly believed that one could subdivide power under the Ottomans into a discrete set of structures. The result is a fascinating, but heavily skewed book, which gives a very elite perspective on Ottoman history. The obvious subtext is that if you weren’t involved somehow in one of those categories, you weren’t a part of the power structure. This seems highly simplistic to me: informal structures of power are often as important as formal ones, and the notion that power can be transmitted unidirectionally on an empire of millions of inhabitants seems a bit thin.

At any rate, we had our discussion, and then it was back to the apartment for me, to prepare for tomorrow’s seminars. Plenty more reading to go. I’m now on the cusp of finishing the spaghetti I made last Wednesday, which is also an achievement of sorts.