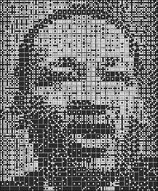 I know it’s bad form to be irritable on Martin Luther King Jr. Day, but I can’t help it. Every year, we get the same load of baloney about what a great hero MLK was and how his dream is finally becoming a reality and blah blah blah. But as any moron with half a brain would know by reading MLK’s speeches, post 1966, MLK was about more than simple racial harmony (which contrary to popular belief isn’t exactly thriving either). He had a lot to say about the poor, unjust wars, and so forth. He was hardly the safe namby pamby liberal we seem intent on turning him into.

That said, I spent the day predominantly on errands of no great importance. My Kanga (PowerBook G3 original) is now on eBay, as I came to the conclusion that less is more, and, well, I just ordered a new (refurbished actually) MacBook Pro. My rationalization is that I need a laptop and the Kanga wasn’t really going to work as a substitute for the non-functional Compaq. So there we are. I backed up files, took a few pictures, bought all manner of odds and ends in some way necessary to the apartment, and came up with a definite course list for the term. Worthy pursuits all, though I’m at a loss to say where the rest of the day disappeared.