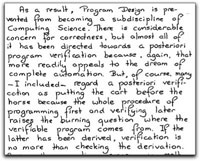 I hate writing. Scratch that. I find writing to be the most aggravating activity in the world (with the possible exception listening to fools, which clocks in pretty high on that roster too).

The problem is actually pretty simple. I have an idea, or an observation (often regarding an assignment). It seems decent. I want to put it down on paper (or as is the case these days, on computer). So, I try to write it out. But it doesn’t quite come it right. It gets convoluted or it doesn’t sound as clever as I thought it was, or I somehow wind up on a tangent writing about something I had no intention of discussing or…

At some point in the process, I realize I’m writing garbage. So I try again. Usually at first, I’ll just start near the end. Hoping to turn things around you see. That’ll fail. So I wind up rewriting the whole darn thing. Again. And again. And so on.

At some point, I give up. Sometimes, it’s because I’m marginally satisfied. More often, it’s because I’m sick of the whole thing, or don’t have any more time to blow on it. The result is that most of the time, I can’t stand to read what I’ve just written. I know it’s garbage, but I haven’t got the will or the means to do a damn thing about it.

Today, I wasted a good hour trying to expand on an op-ed I saw in the NY Times (Gar Alperovitz, “California Split”, Feb. 10). Good op-ed on the virtues of decentralizing the US. All I wanted to do was to elaborate on the benefits such a plan would have for the left, while simultaneously allowing us to coopt much of the right in its execution. Yet somehow, my thoughts just wouldn’t come out right.

I also had the privilege of writing something short for a class. The advantage there was that I could let my conscience rest on the issue of quality: deadlines are deadlines, after all.

Reading is fun (lots of that today). Thinking is okay. But writing? Maybe academia isn’t such a hot destination after all.