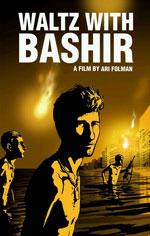 I saw ‘Waltz With Bashir’ this afternoon, Israeli director Ari Folman’s animated documentary of his attempt to recover his ‘lost’ memories as a soldier in the 1982 invasion of Lebanon, and ascertain his own role in the war and the events leading up to the Sabra and Shatila massacre.

It’s a film well worth seeing. Aesthetically and technically brilliant, it offers an often jarring look into the experiences of half a dozen Israeli young men thrust into the midst of a situation for which they were wholly unprepared. The visuals (and the soundtrack) give ample play to the frequent brutality and insanity of the events recalled. Finally, uncomfortable questions about ultimate responsibility for failing to stop the massacre are not unvoiced.

As good cinema, documentation of the ‘fog of war’ and an exercise in Israeli soul-searching and collective therapy, the film works well. Unfortunately, that’s as far as it goes. It concerns itself only with Israeli experience and memory. Individual Arabs have no voice. As undifferentiated collective or silent adversary, the Arab occupies the margin throughout, without ever having the chance to speak. The war itself is not questioned, save perhaps implicitly. Public support for the war is not interrogated.

Given Folman’s project, these omissions are not wholly unexpected or unjustified. After all, a documentary is not a soapbox and 90 minutes is scarcely enough time to lay out the issues, let alone explore them in depth. But ‘Waltz’ does suggest an uncomfortable reality: while liberal Israelis are willing to revisit the traumas and darker moments of their past, they are far less interested in examining the lives which that past so irrevocably altered. And a war in which only one side fights is just another name for a massacre.