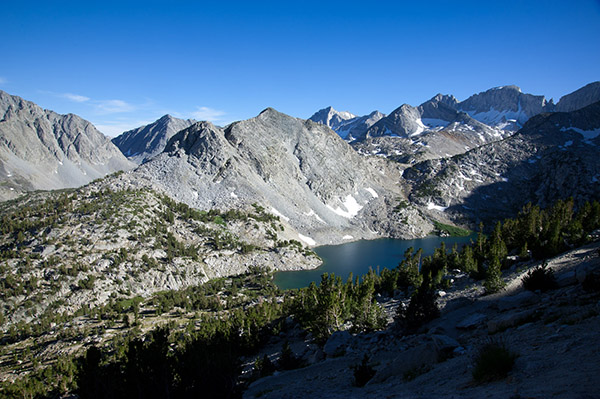 Summary: From Mosquito Flat in the Little Lakes Valley, we followed the trail up over Mono Pass, and then descended down the main drainage to Lake Edison where we spent the night at the Vermilion Valley Resort.  The next day we retraced our steps.

This route for a Trans-Sierra dayhike has been on my radar for some time, but it took until this summer before I managed to finally get all the pieces together.  Because we didn’t want to split our group of 4, we opted to do the hike not as 2 groups with a key-exchange but as an over-and-back trip, spending the night at the Vermilion resort (tent cabins).  This presented some logistical challenges (ferry schedule) and made for a more difficult hike (having to go both directions).  We actually ended up taking about the same amount of time (11 hours) for both directions.  Aside from mosquitoes, the timing was nearly perfect as there was almost no snow to impede us on Mono Pass and the streams were all manageable, but we still saw many wildflowers at all elevations.  If one has a choice of directions, I would recommend the eastbound route, despite the additional elevation.

Following a short night at the East Fork campground near Rock Creek Lake, the four of us set off from Mosquito Flat around 5:30AM.  False dawn meant we had no need for headlamps, and after a couple of junctions we were ascending rapidly on granite hillsides above Rock Creek.  We found both wildflowers and mosquitoes in abundance there.  The sun caught up with us at the fork below Ruby Lake, and we took the left branch, following long switchbacks below Mt. Starr towards Mono Pass.  We had tremendous views of the Rock Creek basin.

A few hundred feet below the elevation of the pass, the trail turned abruptly into a narrow ravine losing the view, and we passed a boulder field and a small remnant of snow.  Just before 8AM we reached the pass.  Hoping for better views, we took a detour to the nearest peaklet overlooking the Rock Creek area, and took the opportunity to have a snack and admire the nearby peaks (Mt. Tom, Mt. Morgan (S), Mt. Abbot, Mt. Dade) as well as the basin.

Descending the other side of Mono Pass, our views north steadily improved.  Past Summit Lake, we climbed a small hump into a parallel valley, and soon we could see the lakes and granite slabs of the Pioneer Basin, and much of the Mono Creek drainage.  At a lovely grassy spot below Trail Lake, we took a break to enjoy the sight of the nearby Fourth Recess.

A mile or so further on, following some steep switchbacks, the trail descends into the trees where it largely remained for the rest of the hike.  Despite the high-snow year, stream crossings were reasonable, although we did end up crossing one stream near the Fourth Recess junction four separate times, navigating a marsh full of flowers and insects.  A few miles on, between Hopkins Creek and Laurel Creek, the trail emerged from the forest into an amazing meadow positively brimming with wildflowers.  Everybody stopped for photos.

We took our lunch break before 1PM, near the Third Recess trail junction.  The next few miles in the forest were uneventful, but the ascent above the north fork of Mono Creek in the afternoon sun proved an unwelcome surprise.  We did get some good views across the valley before our trail joined the JMT, although Lake Edison remained entirely invisible.  For the first (and it turned out only) time on the trip, we weren’t able to find a dry way to cross at Mono Creek’s north fork, so the boots had to come off.  A pack train passed us while we were drying on the other side.

The last mile was as usual the longest one (or so it felt) as we hurried down the trail, anxious not to miss the 4:30PM ferry.  Fortunately, we arrived with time to spare.  The ferry ride to the other end of the lake was a full one, alongside fishermen, dayhikers and JMT thru-hikers.  Despite its invisibility from the trail, Lake Edison was quite good-sized, and we had plenty of time to admire the Silver Divide to the north as we crossed.  We were deposited at a landing below the Vermilion resort.

This was my first time at Vermilion, so I didn’t know what to expect.  The small store was chock full of hikers coming in and out, and the employee at the counter seemed to be responsible for everything, from camping reservations to JMT cache pickups.  The restrooms (of which there were 3) adjoined the showers ($6), which made for something of a backlog.  Most people appeared to simply be camping nearby, although they did also have hotel rooms (all booked for the weekend) in addition to the tent cabins, where we had reserved space.  After some waiting, we received the okay to go to our tent cabin, which proved a minimalist structure, with holes in the floor, a flap that couldn’t quite be closed, and 4 bedframes with mattresses.

This particular Saturday was barbecue night, which as we discovered when we went for dinner, meant that the restaurant only served barbecue.  It was evidently a popular night too, for the place was full of both car-visitors and hikers, and seats were in short supply.  The menu’s 3 choices, tri-tip, chicken and pork, had diminished to 2 by the time we ordered (they ran out of chicken), but when the food did arrive, we were all happy to have a hot meal.  Dessert was a bit disappointing (pies made from frozen pie-filling) but we did not go back to the cabin hungry.  The mosquitoes happily seemed to have disappeared.

The next morning we got up at 6AM, after a surprisingly cool night.  Despite a number of loud groups, we all managed to get some sleep.  Unfortunately, the first boat of the day wasn’t scheduled to leave until 9:30AM.  Not enthusiastic to start so late, we had discussed with one of the place’s employees the night before and learned that for $75, we could get an earlier ride, perhaps as early as 7:30AM.  Given the long, warm day ahead, this seemed like a worthwhile trade, even when the actual price turned out to be $100.  After settling out surprisingly large tab (things add up quickly), we were on our way.

It was still pleasantly cool when the boat dropped us off at the far end of the lake a bit after 7:30AM.  The JMT hikers waiting at the landing were surprised and pleased to be able to catch an early ride to the resort and breakfast.  Once boots were adjusted and photos snapped, we started up the trail.  Soon, we were at the crossing of the Mono Creek’s north fork.  Following a suggestion we’d got at Vermilion, we explored about 150 ft. upstream, and found a good crossing on a log.  No need to take off the boots this time around!

We continued along steadily through the woods for the next few hours.  While it did get warmer, it remained mercifully well below the 80 degree temperatures of the previous day.  The shade also helped.  We encountered few hikers.  Aside from the meadow we’d stopped at the previous day, there weren’t any notable views.  We had a pleasant lunch a little below the Hopkins Creek crossing before beginning the main ascent just beyond.

Past the junction with the trail to Third Recess, we met a mule team carrying trail equipment.  When the trail crossed Golden Creek near Fourth Recess, we took the opportunity to pump water and enjoy the idyllic setting, surrounded by wildflowers and mountains.  A perfect area to camp, if one ever ends up in that area and has time to relax.  We proceeded onward in the direction of the pass.
The final 1500 ft. up to the pass felt longer than they were.  The views were good, but most of the interesting stuff to see was in back of us.  We made another pause above Trail Lakes, and then slowly worked our way to Summit Lake and Mono Pass, which we crossed at 4:30PM.  There we took a much-appreciated break.

Going down the other side, our progress was soon slowed by the presence first of numerous wildflowers in the rocks, then of excellent views of the whole Rock Creek area lit by the late-afternoon sun.  We took many breaks to admire Mt. Morgan and Mt. Tom behind it, and attempted to identify the peaks surround Mt. Abbot, Dade and Mills.  Lower in the valley, we could see not only Ruby Lake but also half a dozen others.  Shadows lengthened as we descended, and by the 6PM, our side of the valley was entirely in the shade of Mt. Morgan.  The mosquitoes were also becoming more plentiful, hurrying the last part of our journey.  When we finally arrived back at the Mosquito Flat trailhead around 6:30PM, we had no questions about why it had gotten that name!