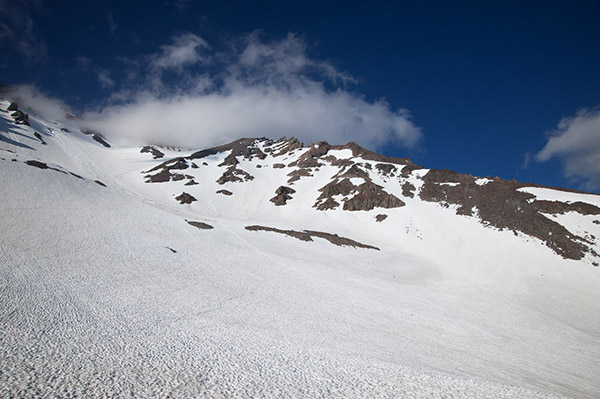 In mid-June, we were part of George’s Shasta PCS trip.  Before bad weather cut that adventure short, the climbing ranger had told us that conditions for the climb would likely be best about 4 weeks later.  Most couldn’t make the date, but the 3 of us were free and decided to give it a go.  To give ourselves the best chance of success (Sassan and I never having summited before), we planned to hike up to Helen Lake on the first day, and do our climb from there.  In retrospect, a few weeks earlier would probably have been better, as the lower part of the mountain didn’t have much snow, which made progress, particularly the decent, slower than necessary.  Happily we had no issues with the weather this time around.

Decamping from next to the Bunny Flat parking took a fair amount of time, so by the time we had finally cinched the last pieces to our packs it was nearly 9AM, and the day was already quite warm.  The trail up to Horse Camp had been almost completely under snow in mid June.  Now it was dry as a bone, with no snow in sight.  The views of Shasta had also changed, with much of the West Face and Shastina bare of snow.
Horse Camp is nominally 1000 ft. and 2 miles from the Bunny Flat parking,  It took us about an hour to get there.  We stopped to fill up on water, explore the hut and use the restroom.  We met a lady there who was doing a study on the affects of high altitude.  Then we headed up onto a sort of causeway, and east toward Avalanche Gulch.

At the bottom of the gulch there was a decent bit of snow, but most of the route was on the rocks, and clear.  We caught sight of a good number of other groups also on their way up to Helen Lake.  We took our time going up, for it was now a warm morning (high 70s) and the trail was ascending steeply.  We did see a few folks on their way down, mostly sliding (or even snowboarding) in the snow-filled ravine-bottom.  Around noon above 9000 ft., we crossed over a rock lip and onto the snow for good.  Thanks to the heat, the snow was quite soft and wet as we slogged our way along.

While Helen Lake isn’t really visible from below, much of Avalanche Gulch is.  We could easily see the route up to the Red Banks.  There were plenty of people returning from a presumably successful summit.  Meanwhile, we resorted to crampons for the last part of the climb to Helen Lake, as the steep slippery snow made progress otherwise quite slow.  We crossed the little hill above the lake around 2PM.

Calling the place Helen Lake can be misleading, as I discovered.  At least in the winter and early summer months, there is no lake to speak of.  Rather, there’s a flattish area at the bottom of the long snow gully up to Red Banks, where a small horde of climbers set up camp.  The good camping areas were mostly taken already, but by applying Chris’s shovel to the local topography, we managed to create a decently flat spot to pitch a tent, not far from where one of the rangers had put his tent (which he picked up and moved as we were preparing to pitch ours).

After having some lunch and admiring the views, which were substantially improved by a few puffy clouds, the next order of business was to get water for the next day.  Since there were no streams, everything being frozen, this meant taking a large plastic bag a safe distance from camp, filling it with hopefully clean snow, and then bringing it back and melting that snow one potful at a time on the stove.  Given the large number of people who had passed through the area, we opted to process the newly melted snow through our water filter too.  The whole thing took a fair amount of time.

Shortly before starting on dinner, the ranger came by and gave us the rules of the camp, as well as some tips for the climb.  We ate our rehydrated freeze dried food, watching the shadows slowly begin to lengthen, and adding layers of clothes to combat rapidly falling temperatures.  People continued arriving throughout the afternoon.  By the time dinner was finished and the packs for the next day were prepared, there were at least 25 tents in the (relatively small) area.  A few brave souls even camped on the other side of the hillock, with great views to the west, but no protection from the wind.

We were up at 3AM, following a rather uncomfortable night.  A wind had sprung up, and the many flapping tents and people making early starts kept things far from quiet.  It was quite dark still, but you could see several lines of headlamps moving slowly up the mountain.  By 4AM, we were among them.  The snow was crisp, but not frozen, and the crampons worked quite well.  We pretty much followed the footprints of those ahead of us.  While we did see a few groups that had roped up, the good snow, near-obvious route and cool temperatures made it one of the most pleasant and relaxing climbs I’ve ever done.

False dawn came before 6AM and found us behind a group of eight people, using their footprints as a guide.  Soon the headlamps were no longer necessary.  Even when the sun began to light up the nearby areas, we remained in the shadow of Mt. Shasta.  The views to the west and north were tremendous, hundreds of miles of rolling green forests, several ranges of snow-capped peaks (the Klamaths and the Trinity Alps) and nearer to us the ribbon of I-5 snaking its way north past the towns of Dunsmuir and Mt. Shasta.

Red Banks proved less pleasant.  There were 3 primary chutes to choose from, and we opted for the middle.  There was plenty of loose rock to be wary of, as we transitioned off of the snow.  The wind had returned with avengeance.  Still, by 7:30AM, we had worked our way onto the lower stretches of Misery Hill, and could take a break in the shelter of a few rocks.  The views, in all directions, were superb.

Perhaps because we had spent the night at altitude, Misery Hill didn’t quite seem to warrant the name.  The wind whipped dust around and made talking hard, but otherwise the trail proved fine.  Eventually, we crossed onto a broad plateau and got our first views of the true summit.  However, we managed to lose the trail just below, and ended up doing some unnecessary scrambling across talus before regaining the trail near the famous hot spring where John Muir supposedly stayed to avoid freezing during a blizzard.  15 minutes later and we were on the summit.

On top, we took our time admiring the scenery.  There were probably another 30 people doing the same.  Thanks to the wind and the weather, the sky was very clear, and we could easily make it Lassen Peak in the south, Thompson Peak in the west (Trinitys), Mt. Eddy (also in the west), and what I later learned was Mt. McLoughlin in southern Oregon.  Nearer, Lakes Shastina and Siskiyou, the town of Mt. Shasta and Black Butte were all quite prominent as well.

After the obligatory photo on the summit and signing the overflowing register, we began our return.  Crossing and descending Misery Hill went reasonably smoothly.  We tried to keep off the snow near the top of Red Banks, but the steep ridge and myriad of loose rocks didn’t make it seem worthwhile.  This time, we opted to follow the ridge down to what is essentially a small pass, west of the 3 chutes we’d seen coming up.  The melting of the glacier had made traversing on the back side impractical, but with some assistance, we did a short class 3 move that dropped us down right on the pass, with good snow before us leading all the way down to Lake Helen.

Following the example of the group ahead of us, we descended 100 ft. with crampons to the top of a glissade track.  There, we paused to take off the crampons and secure all loose items and watch another group commence the 2500 ft. slide to Helen Lake.  We followed them, at a safe distance.  The soft snow meant that it wasn’t hard to avoid picking up speed, so despite having to slow down repeatedly for the group in front, we managed to descend to our camp in a little over 20 minutes!

Decamping from Helen Lake took some time, as our packs seemed to have mysteriously shrunk.  Chatting with our neighbors who were also decamping, we learned that this was also their second attempt on Shasta, having tried on the same weekend in June that we had, and having been foiled by a whiteout at Helen Lake the same day we turned back above Horse Camp.

From Helen Lake, we managed to glissade part of the way down, but the gentle slope and soft snow forced us to resume walking after ~500 feet.  We left snow for rock around 9400 ft.  Compared to glissading or sliding on snow, progress hiking down the trail seemed slow and painstaking in the warm afternoon sun.  We reached Horse Camp at 4PM.  Most of the people seemed to have gotten down long before us, as we didn’t see many going down (compared to going up in the morning).

The final 1000 ft. down to Bunny Flat were completely free of snow and hot to boot.  We were happy to reach the trailhead near 5PM.  On the drive back, we followed the advice of the folks we’d spoken to at Helen Lake and stopped in Red Bluff for dinner at a pizzeria, which we found despite google maps’ evident confusion about the local geography.