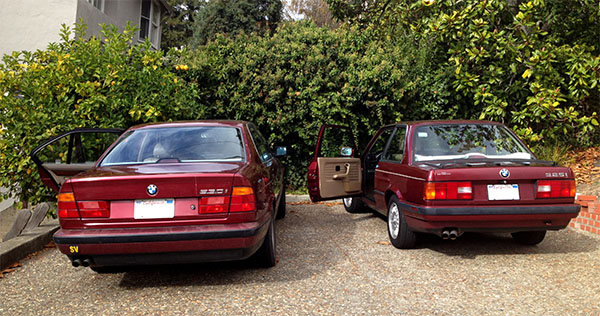 Thanks to a lucky search on craigslist and some quick phone calls by my resident car-expert (thanks dad!), I am now simultaneously the proud owner of a 1990 BMW 325i (E30) and a 1994 530i (E34).  Lest I give the wrong impression, I should add that the combined purchasing cost of both these vehicles came out to slightly less than the insurance payout for my wrecked 2000 328i (E46).  The plan is to put the E34 on craigslist, once things calm down a bit.

Below are my thoughts on how the two cars stack up.

Exterior.  The cars look like cousins.  Side-by-side, the E34 is clearly larger in each proportion – it is in fact 10 inches longer and 4 inches wider – and its edges are more rounded off.  The E30 is smaller and squarer.  Both have the classic double-round headlights in the front.  By a strange coincidence, the E30 is the same ‘calypso red’ color as the E34, so when parked next to each other the resemblance is uncanny.  Compared to a typical modern compact car, the E30 actually appears quite small, whereas the E34 appears to be nearly the same size.

Interior.  The E34 makes several overtures in the direction of luxury.  It has leather and some wood trim, dual climate control (that I have yet to fully understand how to work) and a variety of electronic controls for the seats.  It feels solid, but a little plush.  The E30 looks decidedly less fancy, with its vinyl seats and black plastic trim, and substantially more minimalist controls.  The only thing I really miss in the E30 is the aftermarket CD player with aux. audio in (the E30 has a cassette player).  The E34’s extra size is evident in several ways – a considerably larger back seat, more expansive windows and a variety of little storage compartments not present on the E30.  The E30 is not a car to count cupholders in.

Ride.  The E34’s ride is firm, but generally not harsh.  Noise is definitely present at speed, but not to the point of being distracting.  The ride in the E30 feels significantly more raw – you hear and feel more.  After a few weeks, I found myself spending considerable effort on the E30 to avoid bumps and potholes.  The ride is smooth enough on good pavement, but the E34 is definitely the more comfortable car when traveling down roads with less than ideal surfacing.

Drivetrain.  The E34 is a heavier car, and a bigger car, but it also has a more powerful engine.  The power/weight ratio on the two cars is nearly identical, and the power band is actually surprisingly similar (both cars have peak power at 5800RPM, peak torque at 4300-4500RPM).  Nevertheless, the E30 is both subjectively and objectively the faster car.  Despite a much stiffer gas pedal, the E30 accelerates more freely, and the engine is smoother as it revs.  The gearing on the E34 seems shorter in lower gears, but taller in 5th gear.  Like the gas, the clutch pedal on the E30 is more stiff.  The E30 returns substantially (20%+) better fuel economy, at least when driven on the highway.

Handling.  The lower curb weight and shorter wheelbase of the E30 make it feel more nimble.  I find myself equally at home with the steering on either car.  The E34 is a much better car for coasting though, thanks I suspect to the extra weight and larger wheels.