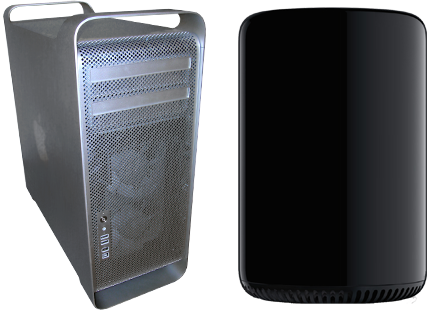 Clearly most striking thing about Apple’s newest Mac Pro is how little it looks like it’s predecessor.  Eschewing the large silver tower design that Apple has used more or less unchanged since releasing the original Power Mac G5 in 2001, the new Mac Pro has the appearance of a sleek dark-gray cylinder, or as some have unkindly suggested, a trashcan.

Considering the neglect of the past few years (the 2012 update to the Mac Pro has basically no meaningful updates over the 2009 edition), many Mac Pro owners were pleased to be getting any update at all.  Still, once the initial excitement died down, it became immediately apparent that in its quest to update the design of the Mac Pro, Apple had made significant changes to functionality.

Classy silver exterior aside, the pre-2013 Mac Pro was essentially a typical dual-socket workstation housed in a large tower case.  While not quite as expandable as its size suggested, it nonetheless had ample room inside for additional disk drives (6), expansion cards (4) and memory modules (8).  Couple that with the ability to upgrade to dual 6 core processors and you had a machine that was (and is) expandable in numerous different ways.

The new Mac Pro in contrast is a heavily customized design, consisting of a single socket motherboard, and two custom video boards arranged to look like a ‘Y’ from the top.  Internal expansion meanwhile is limited to replacing the CPU, adding up to 4 memory modules, and swapping out the custom boards that house the SSD and the two video cards.  While a third party now offers SSD upgrades for the machine, the only video boards that currently fit the machine are replacement parts from Apple, and there is currently no effort on the part of third party manufacturers to support the machine.  The lack of internal expansion means that all other additions to the system will be via Thunderbolt 2 or USB 3.0.

Apple appears to have made two bets on the Mac Pro.  The first one is that multiple GPUs (video cards) are of greater benefit to most of their users than multiple CPUs.  You can’t buy the Mac Pro with just one video board, and it can’t fit more than one CPU.  Moreover, you’re forced to pay for workstation class video boards.  Now while it is true that with 12 core CPUs, the benefits of a dual socket machine are a lot less than they used to be, the fact remains that there is plenty of software that do take advantage of more than 12 physical cores.  On the flip side, their is little precious software that takes full advantage of 1 GPU, let alone 2.  Apple’s Final Cut Pro X is one of the small handful that do.

Apple’s second bet is that expansion via external Thunderbolt and USB will be as effective as expansion via internal SATA and PCIe (not mention that 4 memory slots is sufficient for all users).  Yet Thunderbolt devices remain high-priced and relatively rare.  External expansion costs in terms of additional devices needed, as well as the complexity of having cabling and power outside the machine.  Since the internal video cannot now (or likely ever) be upgraded, Thunderbolt is also the only way to improve video performance going forward, and external video support is compromised by poor drivers, Thunderbolt bandwidth limitations and the cost/complexity of external PCIe enclosures.

All in all, the Mac Pro looks like a slick design, but it’s hard to imagine that it’s a better choice for the majority of users than a straightforward upgrade of the old tower design incorporating a newer chipset and Thunderbolt.  The forced inclusion of multiple GPUs and the need to use Thunderbolt devices for most expansion on the new Mac Pro pushes up costs considerably, while the benefits of the new design seem to be limited to aesthetics and (perhaps) modest power consumption savings.  Unlike the older machines, this Mac Pro is unlikely to age gracefully as it has a much lower ceiling in terms of what can be upgraded (1 CPU socket, 4 memory slots, Thunderbolt instead of PCIe). Ultimately, the new machine comes across as a more consumer-oriented, dare I say disposable, machine.