END_OF_DOCUMENT_TOKEN_TO_BE_REPLACED

I’ve now installed Windows 8.1 three separate times and used it on and off for a couple of months, and I can’t say I’m really warming to it.

The problem, as has been pointed out many times now, is that Microsoft seems to have decided that tablets are the future, and rather than build an OS specifically for tablets, they transformed their desktop OS to make it more tablet friendly, and in the process made it very desktop unfriendly.

END_OF_DOCUMENT_TOKEN_TO_BE_REPLACED

After four years, it finally looks like it’s time to upgrade my desktop machine.  For most things, the machine is fine, but when it comes to processing images in Lightroom, the delay involved in rendering each image (4-5 seconds per 16MP raw file) has started to be annoying.  The hope is that by jumping forward 3 processor generations, and doing some modest overclocking, I can get that down by 40-50%.

END_OF_DOCUMENT_TOKEN_TO_BE_REPLACED 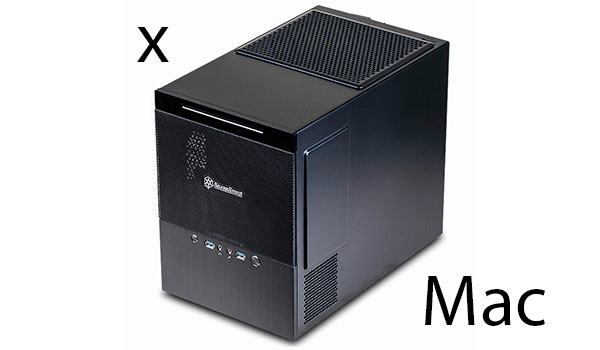 Ever since the introduction of the first Power Mac G5 towers, a number of Mac users have been holding out hope for a mid-range machine that would offer more expansion and upgradability than an iMac, at less cost than the a Power Mac G5 (or later Mac Pro).  Ars Technica’s John Siracusa gave this elusive product a name: the xMac.

The basic premise of the xMac of course was that we needed a Mac that was both semi-affordable (not huge was nice too) and at the same time somewhat future-proofed.  The iMac for all its virtues has never been a particularly friendly machine for upgrading and has only gotten worse with time.  These days, even changing the hard drive is a pain, and of course if the display goes, you’re hosed.  The Mac Pro meanwhile has always been pretty good on the expansion front, but it’s hard to justify paying $2500+ when a much less expensive machine would work equally well for my tasks.  Plus recent rumors notwithstanding, Apple seems to have more or less abandoned the Mac Pro at this point, leaving it woefully outdated (CPUs are 2 generations out of date, machines lack Thunderbolt, etc.).

END_OF_DOCUMENT_TOKEN_TO_BE_REPLACED

Clearly most striking thing about Apple’s newest Mac Pro is how little it looks like it’s predecessor.  Eschewing the large silver tower design that Apple has used more or less unchanged since releasing the original Power Mac G5 in 2001, the new Mac Pro has the appearance of a sleek dark-gray cylinder, or as some have unkindly suggested, a trashcan.

END_OF_DOCUMENT_TOKEN_TO_BE_REPLACED

I recently had access to an 18(!) core machine, so I naturally ran my favorite benchmark – building the clang 3.2 C/C++ compiler – using between 1 and 36 threads.  The build scaled quite well.  Going from 1 to 6 threads gave a 5.5x speedup, while going up from 1 to 12 gave a 9.3x speedup.  At 18 threads, the speedup was 11.8x.  Above 18 threads, there was no speedup.  Given that the makefiles don’t seem to have been tailored specifically to many threads, that’s overall pretty good.

END_OF_DOCUMENT_TOKEN_TO_BE_REPLACED

The project I’m working on involves compiling a huge number of source files which means we need a sizable amount of scratch space on which to run our experiments.  Our main compute server was running a little short on disk space, so it seemed like the appropriate time to add a new disk. We considered both solid state and traditional spinning platter drives.  The SSD seemed like the better performing options, but we eventually settling on an HDD, as the price of SSDs (due to restriced suppliers) was still prohibitive.

I was curious though how much performance improvement an SSD might have yielded, so I ran a small experiment on my desktop, which does have a (small) SSD.  I built the clang C/C++ compiler version 3.2, first off the HDD (a typical 7200RPM 750GB affair, then off my SSD (a Crucial Sandforce MLC device), and finally off of a ramdisk (Linux tmpfs).

Less than a 1% difference in compile time between the 3 options.

Similar to the case of Lightroom, it looks like compiling, at least for a mid-sized project (500MB of source) doesn’t benefit from an SSD vs. a hard disk.  Considering that ramdisk and HDD performance were virtuall identical, it seems quite likely that the whole thing never even left the memory of the operating system’s disk cache.

END_OF_DOCUMENT_TOKEN_TO_BE_REPLACED

As part of my attempt to puzzle out why Adobe Lightroom has been (comparatively) slow with my E-M5, I’ve taken a number of timings of different attributes.  Among other things I’ve concluded that:

END_OF_DOCUMENT_TOKEN_TO_BE_REPLACED

So I’ve been complaining for some time about the speed of Adobe’s Lightroom photo processing software.

I finally got around to doing some comparisons of import times, using files from different cameras.  My initial thought was that the auto-correction used by micro 4/3 lenses was slowing things down on my recently acquired E-M5, along with larger files.  To test that theory, I took 100 RAW files from a number of different cameras and lenses, and measured how long it took to import them and generate 1:1 previews.