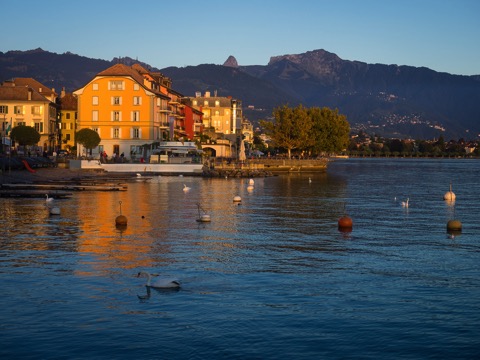 We wound up completing most of the Swiss Via Alpina in the course of 11 days.  A few of the days were shortened through the use of bus and lifts, but we only really skipped one stage that we’d planned to do, due to weather.  None of the stages as we did them were excessively long, although our habit of sleeping until 8AM and enjoying breakfast did result in some late starts and meant we sometimes finished later in the afternoon than was ideal.  We tried to keep a reasonably fast pace, but frequent photo breaks kept our overall average down.

On the whole, we did well with the weather.  Aside from the Kandersteg-Adelboden section, we did not have to abandon any stage due to weather and the only truly unpleasant bit was during the high winds getting up to Hohturli on the Griesalp-Kandersteg route.  Perhaps earlier in the season would have been drier, but people we met who’d started earlier and did the whole thing commented on how their first few days were unpleasantly hot.  Warm weather was not a problem for us.

We traveled light – thanks to the missing luggage lighter than we’d originally planned.  This worked out well, keeping our daypacks under fifteen pounds and generally making the trip easier.  We didn’t have much in the way of extra clothes, so we had to wash ours with some frequency, but every night we had access to a sink or bathtub, so this was not difficult.  In terms of gadgets, we were limited to smartphones and cameras which also simplified matters and did not prove much of a hardship.

I think we did well in terms of accommodations.  Pretty much all reservations were made the day before or the day of, and all save one of the places I would happily go back to.  Obviously had we gone during the high season, more advanced planning would be necessary.  In terms of food, we picked up bread, cheese and fruit in grocery stores for our lunches, and that ended up being quite sufficient, particularly since every hotel offered a hearty breakfast.  Dinners were mostly at restaurants, though the ‘demi-pension’ (half-board) option, when available, was a nice treat.

Switzerland has a reputation for being an expensive place to travel.  Day-to-day costs varied somewhat, but in terms of Swiss Francs, accommodations were generally 100-140 francs for the two of us per night, and all the hotels included breakfast.  Dinners tended to be 23-35 SFR per person, and other incidentals added up to at most 15 SFR or so per day.  By American standards these are high prices, but they compare favorably to what one would pay for a self-guided tour through a reputable outfit, and we had the ability to adjust our itinerary and schedule day-by-day.

All in all, I found the Swiss Via Alpina a beautiful and challenging trek, with a delightful mix of mountains and countryside.  The hardest part indeed was adjusting back to day-to-day life after we finished the trip.