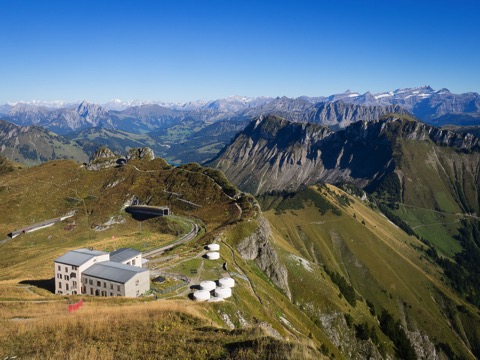 It was quite cold when we awoke.  They’d left us a breakfast tray as promised, but the water for the tea was lukewarm by then and the bread was simply not very good.  Concluding that there wasn’t much of a breakfast to be had, we packed up quickly and let ourselves out just before 8:30AM.  The fields outside were coated in frost and we could see our breathe in the air.  The road leading toward the lake was clear of traffic.

To get warm, we set off at as quick a pace as we could manage.  As usual, there were a number of trails to choose from and it was not always clear which the main one was.  Once we reached the sun and it began to warm, we slowed a bit.  The trail crossed over a small ridge to present us with a view down on the large Lac de l’Hongrin, filling the valley before us.  We stuck to the higher route well above the lake, passing along a narrow road through fields and among small farms.  At one point we took the wrong route and had to upclimb through a muddy field.

When we regained the road, we passed a house where a farmer and his friendly dog greeted us.  He was a garrulous fellow and was happy to describe the history of the place (the farmhouse had been constructed by his forebears in 1732!) and how he had come stay there, preferring farming to city life when the choice had been offered many years before.  He also advised us on the best route through to the other side.  We regretfully left him after some minutes as he headed down to extract his tractor from the mud.

Despite the advice, we didn’t have an easy time following the trail, for after achieving the ridge, the trail seemed to disappear into a mire of mud.  After following one false route that dead-ended in a stand of trees, we eventually began to make our way down directly toward a road far below, inadvertently recovering the route part way down.  It was noon when we arrived at the road.

The route followed the road for a short bit, crossing a bridge and then turning, at a picturesque farmhouse with a herd of goats in front, into a field of mud.  The map informed us that this was the hamlet of La Vuichoud d’en Bas.  With some difficulty, we avoided the worst of the mud, and began to ascend again.  We took a brief snack after we’d climbed far enough to be sure of the route.  Climbing further, we reached the ridge around 1PM and a small shed marked as La Vuichoude d’en Haut.

Then it was down again, along more muddy trails into a wood.  The wood gave way to pastures and a few stands of trees bearing fall colors.  Near the end of the valley, we reached the two farmhouses of La Chaude.  From there we could see several trails, and we opted for what seemed the most direct in the direction of the Col de Chaude.  Sweating heavily in the afternoon sun, we reached the Col de Chaude pass (1609m) at 2PM.  From the pass, we had a view down steep hillsides to Lake Geneva, 1,300 meters below.

Beyond the pass, the trail continued north near the ridge, climbing steadily.  While the route itself was not steep, the hillside was, and in several spots it felt downright exposed.  We crossed to the other side of the ridge once, then back and then along the back of the ridge itself as it broadened.  At the Chalet de Plan d’Areine, the trail met the route from the eastern ridge, and a little hundred meters further along, we crossed the ridge to be greeted with views of the rail line and summit of Rochers de Naye itself.  It was 4PM when we reached the train station to be greeted by throngs of people getting off a just-arrived cog train.  We had lots of company on the last few hundred meters of trail up to the summit.

The views from Rocher de Naye (2042m) are rightly considered among the best of Lake Geneva, but in many ways, the back side is the more interesting direction, for on a clear day, such as the one we were there on, many of the peaks of the Bernese Oberland are visible.  There was enough haze on the lake to obscure Geneva itself, but we had a good look down to Montreux and Vevey and across into France.  To the north, the Jura gently broke along the horizon.

Our trek officially ended on the summit.  After taking in the views, we returned to the station to take the cog railway down down.  The views from the train itself were also quite good and it zigged and zagged its way through the mountain multiple times before settling on a steeply downward course.  At the town of Caux we got out, and spent an hour walking around the grounds of the old Caux Palace Hotel which in latter years had been converted into a hotelier school.  Then we continued on the next train down to Montreux, and switched to a local commuter train that left us in Vevey.  We managed to make it out to the lakeshore a few minutes before the sun set.

Our lodgings, at the Pension Famille Burgle, proved slightly tricky to find, but once we arrived, the proprietor, armed with a formidable knowledge of the local sights and scene, helpfully gave us the lay of the land.  The missing luggage had also miraculously shown up, although it proved more of a hindrance than a help since at this point we were used to operating with a minimum of extra items, though my dad was happy to finally have a pair of clear eyeglasses again, the original pair having been lost to the winds of the Hohturli, 5 days before.  Dinner we took at a thoroughly modern buffet restaurant by the unlikely name of City Burger.  As advertised though, it had a good salad bar.