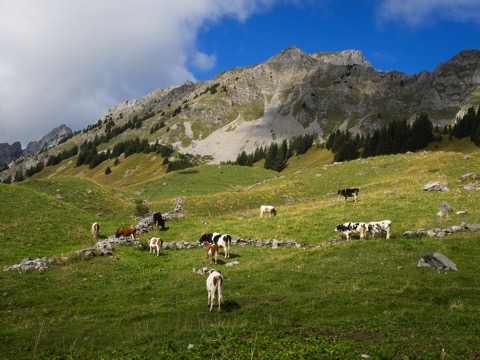 After a good night’s sleep (the rain continued on and off the whole night), we enjoyed a solid breakfast in the dining room.  Whether it was the rain or the fact that it was a Sunday morning, there was almost nobody out and about when we started around 9AM and the town square was nearly deserted.

Crossing the lower section of the town, the route turned into trail again, ascending rapidly through woods toward the next ridge.  The clouds had largely cleared and soon steam was rising from the damp fields.  After passing a farmhouse and pasture, the trail entered the trees again to finally emerge at the lift station of Eggli atop the ridge.  It took a little while to determine which of the three trails was the correct one, but once we had chosen, we proceeded rapidly along the gravel road just below the top of the ridge.  At 11AM we were at Hinter Eggli exchanging the road for a trail once more.

Continuing, the trail dropped rapidly through the forest, crossing a little saddle to rejoin the main ridge and road near Wilde Bode.  We continued on the road, unintentionally missing the standard route as it ascended above to do a high traverse to the pass.  Instead, we continued along near the bottom of the valley.  Around this time, we heard some unusual noises, which we eventually discerned to be an alpenhorn, being blown some distance off.  It was a soothing sound.  Meanwhile, the clouds that had lifted began to come in again, blocking the sun and dropping the temperature.  Despite being on a road, we saw nobody else as we approached the pass.

It was 12:30AM when we crossed over the Col de Jable (1884m).  While not particularly imposing, the pass marked our passage from German-speaking Switzerland to French-speaking Switzerland.  A more immediately obvious change was that the trail on the other side was quite muddy, and we spent a fair amount of time trying to avoid slipping or going knee deep into the mud.  A few minutes beyond, we passed a pleasant farmhouse at Gros Jable, and bit further on, found some rocks in a pasture to have our lunch on.  Happily, the sun had returned.

Next the trail went into a stand of trees, and in addition to mud, we had tree roots to contend with.  It took almost another hour for us to emerge near the bottom of the valley, above the town of L’Etivaz.  There at the Hotel-Restaurant du Chamois we sat at an outside table, enjoying the sun and drinking an apple juice.  Our reverie was slightly interrupted by a number of wasps, who attracted by the juice, made themselves something of a nuisance.

Deciding that it would be best to continue on and shorten the following day’s stage, we booked a hotel in the next town via cellphone, and at 3:30PM we were continuing along a narrow trail next to the river.  The trail crossed, passed a teepee and a bunch of giant bags full of cut hay, and then began its climb toward the next ridge.  Soon pastures were replaced by forests and we were back to dodging puddles and admiring mushrooms.  It was nearly 5PM when we crossed the main road to the center of La Lecherette – a tiny shop, and a sizable hotel with a restaurant.

The Hotel-Restaurant La Lecherette had only one employee present, and she was busy, so it took a while to arrange things.  We did manage to reserve dinner from their restaurant, but also learned that the hotel would be closed the following morning, so breakfast would be a tray left out for us.  Explaining this (and the implications) took a surprisingly long time.  After checking in, we took a walk around the area to enjoy the sunset and say hello to some friendly goats munching in a nearby lot.  For dinner, I had a salad which fine, but my dad had a meat dish which was a disappointment.  Choosing though was easy as the menu had only a few options.  We did have a nice chat with a British couple who appeared to be the only other ones staying the night – they like us were finishing the Via Alpina, but they had done the whole thing (both the initial stages that we’d skipped, and the stage we’d bypassed due to rain).  It cooled off quickly after dinner, so we were happy to call it a night, even if the beds weren’t especially comfortable or quiet.