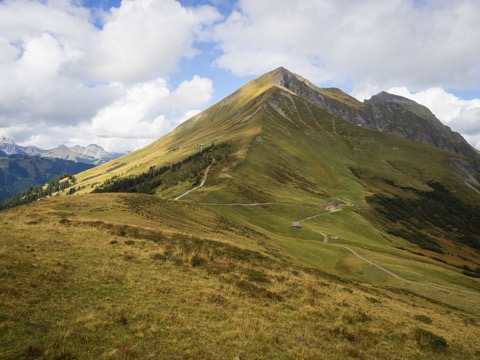 The morning began with a pleasant breakfast in the dining hall.  There was already a decent amount of traffic flowing through the town when we set out around a quarter to 10AM.  The trail began its climb more or less immediately, following the course of a creek swollen by the previous day’s rain.  After a small waterfall, we diverged from the creek into a muddy, damp forest.  Fresh mushrooms, of varying colors and shapes, were everywhere.  After an hour, the trail emerged from the trees into a pasture and joined a small country road.  A few minutes later we reached the few buildings that constituted Seitengraben.

Continuing to ascend, the trail became increasingly messy, crossing streams and bogs and occasionally forcing us to take detours to avoid deep mud.  The views became wider too, though the clouds also began to thicken and darken.  The route took us across a number of rolling hills toward the ridge, and finally around 12:30 we reached the Trutlisberg Pass (2038m).  We took a brief pause to enjoy the view, but after a few sprinkles of rain, continued along.  Happily the rain did not last.

From the pass, our route did not go down the next valley.  Rather it proceeded west along the ridge, actually climbing a little bit, before descending to another saddle, Turli, a kilometer further on, where it intersected a road from Lauenen in one valley and a dirt track from Gstaad in the other.   We went north, toward Gstaad, down the valley of the Turbach.  The trail kept fairly close to the stream in the valley, remaining on its left, keeping mostly dry though there were some occasional bogs.  We passed one farm selling local cheese and another selling eggs.  When we found a bench shortly after the route crossed the stream, we took the opportunity to have a short lunch.

The road descended gently for the next few hours, passing occasional farms.  We saw few other people and no vehicles.  Pastures were mixed with small forests.  In a couple of the fields, farmers were cutting hay.  The trail frequently diverged from the road to cut through fields, or go along the riverbank.  Finally, around 4PM we left the river and the farms going into a wood, to emerge on the other side in the outskirts of Gstaad.

Gstaad was a sprawling resort town.  At its edges, the houses tended to be large and showy, and as we descended into the town, several times we got stuck on dead-end streets, blocked by houses or gates.  There were a good many fancy gardens and one establishment had even been built to look like a castle.  At 5PM we reached the central area in the town – a street closed to cars, bustling with fancy restaurants, boutiques and other high-end shops.  We’d hoped to get some food from the grocery store, but by the time we reached the store, it had closed.  We took a look at the train station and when the rain finally began in earnest, took shelter for a few minutes in a church.

Our hotel, the Posthotel Rossli, was just off this main thoroughfare.  Despite fancy pretensions, it was a pleasant cosy place inside, with nice wooden floors and ceilings, and aside from an unnecessary flat-screen television, our room was quite nice.  We had initially thought of going out for dinner, but the combination of the rain and sore feet from the long descent convinced us to stay in the room and have a homemade dinner consisting of whatever leftovers remained in the packs.  We went to sleep to the sound of further rain.