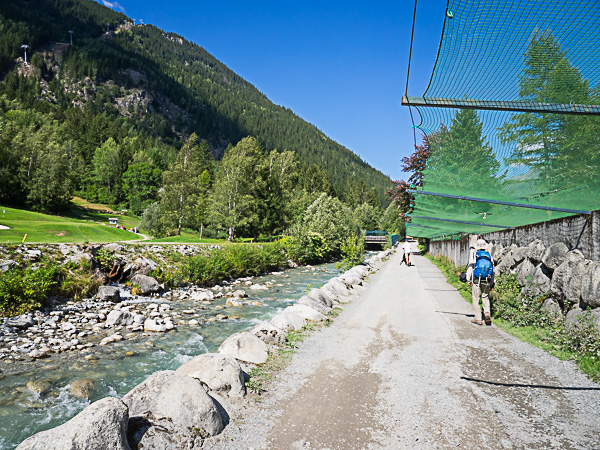 Our day began inauspiciously when I heard somebody at the door of our hotel room. I shouted something and they left. Then I looked at my phone. It was 11AM. Between jet lag and timezone confusion (phones were on European, not Pacific time), we had substantially overslept. Hurried repacking ensued and we rushed downstairs to check out. We had planned to meet my cousin from Geneva for breakfast – instead we joined him and his significant other for a late brunch at a cafe around the corner, looking out on a cobblestone square near the center of the town. They were regulars in Chamonix and he had recently completed the UTMB (Ultra-Trail du Mont Blanc) ultra-marathon only a few days before. It was a brilliant sunny day, and we were grateful for the shade of the large umbrella.

Before leaving Chamonix, we made a couple of stops – first to the post office to mail the extra luggage to Zermatt, then to a local grocery store for snacks/food for our walk. Happily the first stage to Argentiere is quite short, so the fact that we started a little before 2PM was not a problem. It is an easy route too, nearly flat, following alongside the Arve River and railway in the middle of the Chamonix valley. The hardest part was not losing the path among the many alleys and road crossings. There was shade by the river and we gradually left the apartments and streets of greater Chamonix for the fields and chalets of the smaller villages, criss-crossing the river and catching occasional glimpses of the mountains above.

When we reached Argentiere around 5PM in the afternoon, the sun had been replaced by high clouds. Our bed-and-breakfast, the Gite Le Belvedere was located on the main road, a few minutes before the center of the town. Once we’d figured out how to get in (main door was shut and locked), we found we had actually gotten a small suite (last one available) with two rooms and a balcony overlooking the road/valley. Later in the afternoon, we walked into the central part of the village, keeping an eye out for restaurants and interesting spots. By the town center there was an exposition of stunning landscape photographs, many of them of the arctic. Crossing a graveyard we paused to watch the sun set on the peaks of the Mont Blanc massif, briefly painting the needle of the Aiguille du Midi in red.

We had the usual difficulty deciding on a place for dinner (a surprising number of choices for a small town). At length we ended up at the Stone Pizzeria and Bar, a popular spot full of visitors relaxing after their days of paragliding, glacier skiing and the like. I broke my rule and did not get a pizza, which was probably a mistake (nothing wrong with Thai noodles, but you don’t go to a pizza place to get them). By the time we returned to the hotel, it was past 11PM.