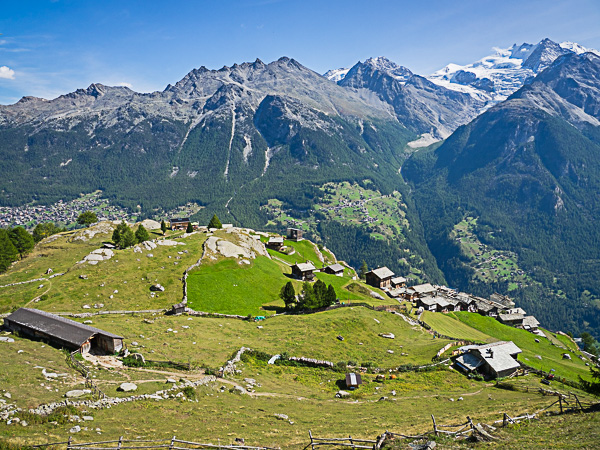 We began the final day of the trek with a good continental breakfast. There were at least 50 other people having breakfast at the same time, but fortunately the important things did not run out. By the time we’d packed and checked out, most of the hikers were long gone (some on the bus down to the valley), so we did not see too many people on the trail. The trail sign marked the climb to Augstbordpass as taking 3 hours, but I thought we might be able to do better. We set off at 8:30AM.

As with other days, we began with a series of steep switchbacks through a thin forest. We gained elevation quite rapidly, which was fine since the sun had not yet risen inside the valley and it was still quite cold. As soon as the grade began to level off, we left the shadow of the nearby mountains and crossed into a large bowl. Ahead of us were open pastures eventually giving way to rocky slopes and somewhere in the wall of mountains ahead would be the pass. We saw a few people, but no recent signs of cows. At one point we glimpsed a small tent partway down the valley behind us.

A few hundred feet below the pass, the trail dipped around a small pond and disappeared in a maze of boulders and rockfall. We lost the red and white blazes immediately, but fortunately the pass itself was easy to see, so we scrambled over rocks and across loose sand, to reach the Augstbordpass not long after 10:30AM. The narrowness of the valley leading to the pass constrained the view somewhat, as did the ridges on either side which went up rapidly. After a short stop, we commenced our descent.

After leaving the pass, the trail dropped quickly into the bottom of the little valley, trying to skirt the worst of the rockfall. We passed a small snowfield, and a person carrying their mountain bike up the trail. Then we crossed to the south side of valley and climbed a bit to turn a corner onto the main Zermatt valley. A few minutes further and we had our first vista point with views from the Rhone Valley to the towns of St. Niklaus and Grachen below, to the Mischabel range across on the other side. While there was some haze in the air, we could still make out many tiny details. We took our lunch on a ledge, supplementing it with fresh wild blueberries from nearby bushes.

We had hoped to shorten the hike down by taking the lift from Jungu, but when we arrived at 2:45PM, the restaurant was full and people in the line for the lift told us it would be an hour wait. Transporting only 4 people at a time every ten minutes, I suspect it would have been even longer. So we skipped the lift, deciding to do the last 2,500 feet down on foot. It was in fact quite a nice warm day which explained why we saw many people on the trail, just out for an afternoon stroll. After Jungu we passed a series of small shrines – perhaps 20 in all, spread out along the trail at regular intervals. We were quite happy though when at least we emerged from a small wood next to an underpass that led us to the other side of the rail line and the train station of St. Niklaus.

While one can continue trekking toward Zermatt from St. Niklaus, we ended our walk there. The choices for continuing – a walk along the floor of the valley near the railway/road and a panorama trail that had been rerouted due to rockfall, adding an extra 5,000 feet of elevation, were not very appealing and in any case we would have needed two extra days to do so. So we were happy when at 5:15PM the train arrived and we could rest our legs and ride to Zermatt in comfort.

It was late in the afternoon when we arrived in Zermatt and found ourselves among the hordes of people walking about the town. After we had dropped off our things at the Hotel Cima Garni (where we’d stayed on previous trips), we strolled about the town as the sun slowly set. To celebrate the end of our journey we had dinner at an Italian restaurant, Pizza Roma. After the meal, the friendly owner offered us cappuccino and we learned that he had in fact come from Rome and was a serious painter who had been friends with the proprietor of the hotel where we were staying.