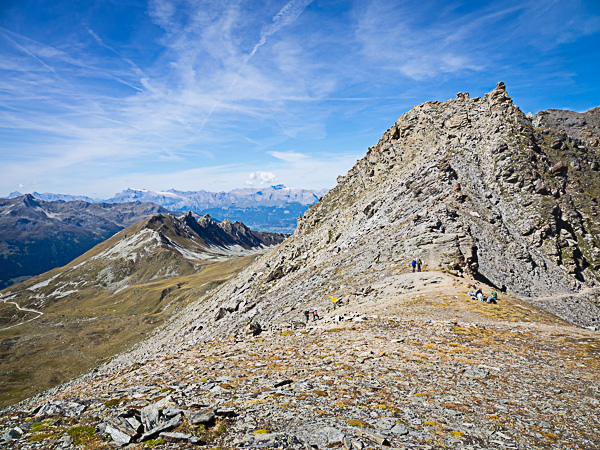 After an excellent breakfast, we followed the innkeeper’s suggestion to start our day on the ‘cascade’ path beside the Torrent des Moulins. The name proved apt as we passed numerous waterfalls on our way to rejoining the main route. We finally left the creek at a large meadow where a sign indicated we had reached the service road to the Hotel Weisshorn. Half an hour later we rounded a small hill to be greeted with the sight of a large white Victorian building perched precariously on the edge of a steep hillside, with a 2,000 foot drop to the bottom of the Val d’Anniviers.

As we arrived, the hotel was in the process of being prepared for a large wedding. There were photographers and people decked out in various formalwear strolling the grounds. Fortunately, the breakfast room was still open for non-guests and we got a table and several slices of their famous wild blueberry tart. There was little question of the provenance of the blueberries – we had been snacking on them for most of the morning’s walk. The recipe seemed unchanged from 14 years earlier, when we had stayed at the hotel and eaten in the same room. When we left around 11:30AM well-filled from the pastry, a sign congratulating Sunita and Daniel hung from the upstairs windows of the hotel.

Above the Hotel Weisshorn, the terrain leveled out somewhat into a series of high pastures, shaped by gently rolling hills. Soon the open landscape lacked trees or other landmarks and it became almost impossible to judge the scale of our surroundings. Higher up we began to see the form of Le Touno – a massive bulbuous mountain of rock and scree that dominated the landscape. At a small saddle, we could see back down the valley all the way to the other side of the Rhone. To avoid an unnecessary descent, we attempted to walk cross country to the next obvious junction, but instead spent a lot of effort to cross several rockfalls and boulder fields. When we finally made it to the junction, it was a matter of another 1/2 mile of steep switchbacks to reach the Col de la Forcletta.

At the pass we paused to enjoy a snack and admire the view. The spot marked not only the high point for the day, but also the boundary between French-speaking Switzerland and German-speaking Switzerland. We had only just begun to go down the other side on a steep switchbacking trail when we saw two people hiking up the chute next to us. When they came closer, we realized both were carrying mountain bikes (25+ pounds) in their hands above their hands . The woman told us it was her boyfriend’s idea (“He’s crazy”).

After the first part, the descent became more gradual and we exchanged a landscape of rocks and scree for pastureland. Directly in front of us were a couple snow-covered summits and as we approached the bottom of the hanging valley we were leaving, the view expanded to include the Turtmann glacier and the north face of the Bishorn. We proceeded for some distance on a dirt access-road, then split to follow steep switchbacks through a thin forest and emerge on the floor of the valley, alongside a gently flowing creek. Half an hour later we arrived in the village of Gruben.

The Hotel Schwarzhorn was the main hotel in Gruben. Larger than any of the hotels we had previously stayed at, it had both dorms and rooms and a large restaurant with fixed-course meals. We relaxed in the room, watching the afternoon shadows creep across the valley. At 7PM we went down to the dining room. When we sat down, we saw that every table was taken. It was a lively place for dinner, and after a long day and no lunch, we were happy to have a full, multi-course meal.