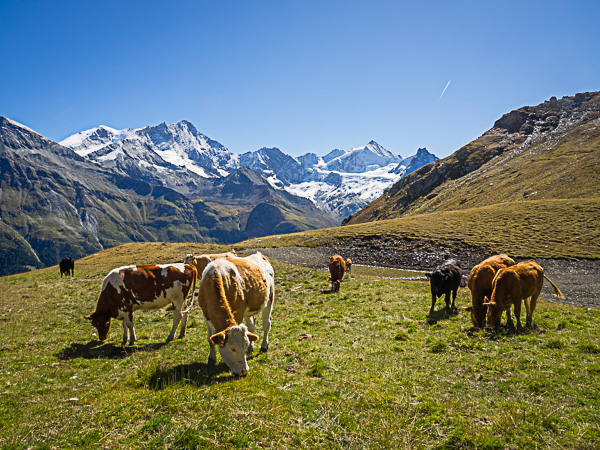 As with the previous stage, we began the day with a bus ride. However the bus schedule was more regular, so we had time to enjoy an extensive breakfast at the hotel before heading out to catch the 8:30AM bus. The ride from Grimentz to the lake was quick, and soon we were following the wide switchbacks of a steep service road on the east side of the lake. When we started, the lake was mostly in shadow but within half an hour, both the lake and the hillside we were climbing were in full sun. The trail was good, but steep and by 10:30AM we had already crested the Col de Sorebois, joining a path on the broad shoulder of the ridge to climb the final few feet to the small summit.

Our views from Corne de Sorebois covered almost 360 degrees without obstruction. Both ends of the Val d’Anniviers were apparent – the Moiry glacier on the one side and the city of Sierre on the Rhone River far below. We could see the little town of Grimentz, as well as the gondola up from it which provided mountain bikes and others easy access via a station a few hundred feet below. We met another hiker who was now doing the reverse of our route, having already traveled from Chamonix to Zermatt, but via glacier crossings.

The rest of the day’s route was downhill, literally. We first dropped down steeply to the gondola station at Tsirouc, then more gently down a small valley and through several herds of cattle to a lift station at Sorebois. There we had the option to take the lift down to Zinal, but chose to continue on foot. On the opposite side of the valley, the white pyramids of the Bishorn and Weisshorn stared back at us. The trail down to Zinal proved steeper than expected and more than once I had to rely on trekking poles when footing failed. Even after we entered the forest, it did not truly level out until we were within a few hundred feet of the river at the bottom of the valley.

We reached the small resort of Zinal around 2:30PM in the full heat of the afternoon sun. Our hotel was in St. Luc, too long a distance down the valley to cover in the remainder of the day, so after checking the bus schedule, we got a table outside the Pensione de la Poste and had tea and pastry (a berry pie). At 3:45PM we were on the bus. At 4:30PM we stepped off in St. Luc. We admired the views of the valley (St. Luc is almost 1,000 feet above the bottom of the Val d’Anniviers), picked up a few items at the only grocery store in town, and began the 1.5 mile walk to the little hamlet where our hotel, the Gite Le Prilett, was located. The heavy shopping bags made the walk feel longer.

The hotel gave us a room on the second floor, with a nice balcony still in the sun. I took the opportunity to sit in the sun and read my book. Later, we went down to have dinner in the restaurant. I was still feeling my cold quite heavily, but the warm pizza helped, as the tea. It was fairly quiet in the restaurant so we got to talk a bit with the proprietor – who had grown up in Chicago before moving to Geneva and then to St. Luc.