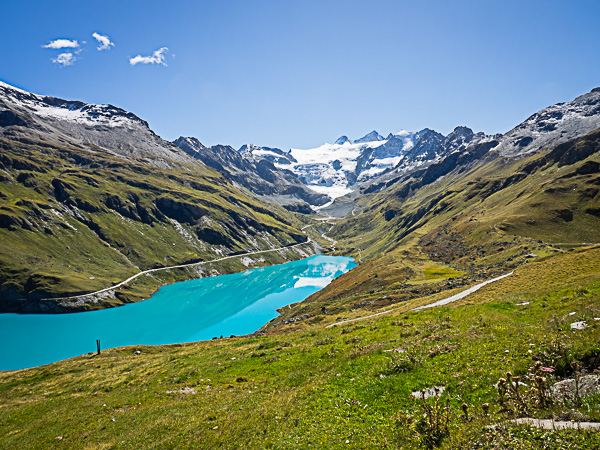 Because we had stayed a bit further down the valley than the route, we chose to shorten the day ahead by taking the bus to Villaz. To get an early start we skipped breakfast, catching a 7:15AM Post bus that was carrying a half-dozen schoolchildren as well as a few locals from villages farther down the valley. The bus made a couple of stops before Les Hauderes, where we switched to another Post Bus, following the narrow road up to the hamlet of Villaz. We were impressed with the skill in which the driver maneuevered around oncoming traffic, despite the limited space. We stepped out in Villaz to a cold, crisp morning.

Our route toward the Col de Torrent began quite steeply, following a dirt track upward through various pastures, parallel to a small stream. We passed a few farmhouses, crossing over the top of a hill to reach a junction after an hour, and continued on a single-track trail. Behind us the Val d’Heren and the rock/ice wall at its southern end became steadily more imposing. Small herds of cattle dotted the hillsides below like ants. The day was crisp and clear and once we left the shade, we warmed up in no time.

Unlike the previous day, the trail up to the pass was a marvel of consistency with a steady, reasonable grade, and no scree before the very end. It flattened a little at a small tarn in the middle of high pastures before resuming a gentle ascent. Just before 11AM we climbed up a short chute to reach the Col de Torrent. From the pass we could see not only the Val d’Heren behind us, but much of the Val d’Anniviers ahead too. We enjoyed a snack (early lunch) on a ledge just above the pass, looking across at the blue-green waters of the Lac du Moiry and the gray ice of the Moiry glacier. While we were paused, a number of people arrived and departed, and as we started down the other side, a group, run by the same Alpenwild tour one of our friends had traveled with the previous summer, stopped to take our place.

The descent toward the Lac du Moiry was rapid and uneventful and by 1PM, we were less than a mile from the dam. As it was still fairly early in the day, I suggested we take a detour and go around to the far end of the lake, instead of heading down directly to the town. So at a large scenic bench, we made a sharp right turn and proceeded via a mixture of use-trails and tracks across the meadows and pastures toward the southern end of the lake. In one field I had to stop abruptly to avoid stepping on a large toad that was camouflaged in the grass. We found several others nearby. From the end of the lake, we had a short steep climb to reach the road and half a mile further arrived at a crowded parking lot overlooking a gray-green glacial lake, formed from the runoff of the Moiry glacier. Unfortunately the cafe at the end of the road had closed for the season, as had the bus service, so we had to make a rather hurried return along the road to reach the dam at the head of the lake in time for a very crowded 3PM bus down to Grimentz.

Our hotel in Grimentz was the decidedly modern Hotel Alpina – quite a contrast from the previous night. We had a balcony with a nice view of the valley, but because I was feeling distinctly the worse for my cold, we went out for a walk later in the afternoon to get some sun and find a warm drink. The main street in the town was closed to cars, making for a very pleasant walk among the wooden chalets and geraniums, but the sun had dropped below the edge of the valley, so we wound up having tea inside the Hotel-Restaurant de Moiry. Then after a rest, we enjoyed a multi-course dinner in the downstairs of our hotel.